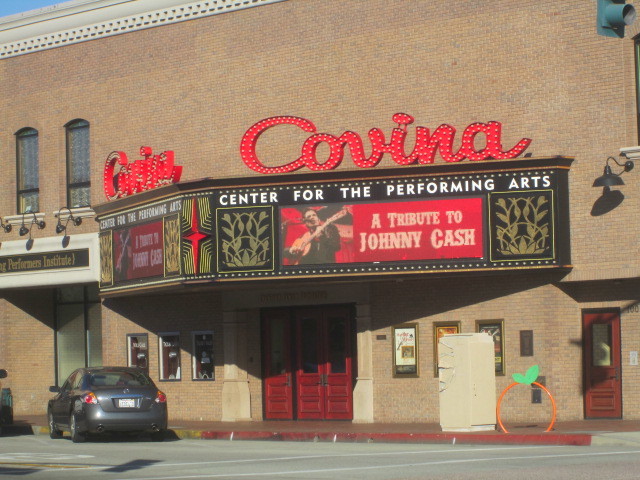 The Covina Theatre was opened December 19, 1921 with Wesley Barry in “Bits of Life”. It was remodeled and reopened October 17, 1935. It was remodeled again in 1947 and again in 1955. A classic 1920’s local movie house with a fabulous neon marquee that was added in 1955, this house was going to be renovated into a performing arts facility. However the building was found to be structurally unsound and unable to retrofit to current earthquake standards, so the city very quickly tore it down in April 2005 without so much as getting an environmental impact report.

The marquee letters were saved and were proposed to put on the new performing arts center that was built on the vacant lot. Unfortunately, they were beyond repair, but replicas were made, and the Corvina Performing Arts Center opened in October 2007.

The Los Angeles has two, apparently one for crying babies, the other for cigar smokers; the Fox Inglewood has one. I think a lot of them were taken out during remodels/updates.

The letters atop the marquee are recreations of the letters.

Yes, that’s what the bio says.

Of the various theaters I attended in the San Gabriel Valley (almost all of them fairly old houses,) the only one that I remember having had a dedicated crying room was the Garvey, my childhood neighborhood house. I got to use it once when I was about four years old and freaked out because the movie started before my older sister had gotten back to her seat after going to talk to friends. The crying room worked. I quit crying as soon as I got there, but I think my sudden calm was from the fascination of seeing a new part of the theater that I hadn’t known existed.

Another theater, the Garfield in Alhambra, had two rooms with glazed windows overlooking the auditorium, one on each side of the house. They served as foyers to the rest rooms, and I only saw the one on the men’s room side. It had no seats as the crying room at the Garvey did, but it’s possible that the one on the women’s room side had seating so it could serve as a crying room. I never asked anybody who had been in it.

Of the theaters elsewhere that I attended, I don’t recall any crying rooms, except for the pair at the Los Angeles, but by that time I was a teenager and wasn’t really looking for them. Articles in post-WWII issues of Boxoffice about new theaters frequently mentioned them, though, and from that it appears that they became a pretty common feature during that time.

Does anyone else wish that movie theaters still had crying rooms, along with cell phone user’s rooms, smuggled in smelly and/or loud outdoor food rooms, etc? I could go on and on!

My attendance at the old Covina began with Old Yeller and ended with Defenseless, the second-last movie before it closed. On that last visit, I noted the entire right-side seats had been cordoned off with yellow tape and the acoustic ceiling tiles above them, hanging like inverted trap doors, started swinging pendulously when the air-conditioning came on. I was the sole paid admission.

A great deal of information about Frank Cox, architect of the Covina Theatre, can be found in The Life of Tignal Franklin (Frank) Cox (1854-1940), a brief biography by his great-granddughter, Robin Yonash, which is available here as a PDF.

Tignal Franklin Cox (called simply Frank Cox in publications from the period when he was working) had a long and successful career as a scenic artist, decorator, architect, builder, and developer. His first known work in theaters took place in the 1880s, when he began painting scenic drop curtains. He painted curtains for the Opera House in Batavia, New York (1883), and the Academy of Music in Auburn, New York (1884), and in 1885 became the scenic artist for Smith’s Opera Houses in Tarrytown, New York, and in Batavia.

He began his architectural career in New Orleans around 1893, though houses of his design were built from Texas to Illinois. He moved his operation to Chicago in 1900, and about 1918 moved again, to Southern California, where he settled in the Los Angeles suburb of Covina. There, in 1921, he designed the Covina Theatre for his son-in-law George Leonardy and his nephew Earl Sinks.

An item in the February 6, 1920, issue of regional trade journal Southwest Builder & Contractor noted that Frank Cox, then preparing preliminary plans for a theater in Phoenix, Arizona, had “…planned more than 50 theaters for the Klaw & Erlanger interests.”

A nice example of Cox’s work is his drawing of the New Lyceum Theatre in Atlanta, which can be seen on this web page. Unfortunately, the New Lyceum was destroyed by fire in 1901, six years after it was built. It was never rebuilt and so never had a chance to become a movie theater.

Several of his early stage and vaudeville houses did survive long enough to be movie houses, though, including the Majestic Theatre at Streator, Ilinois (1907) and the Grand Opera House in Galveston, Texas, both of which are still standing and serving as theaters.

I do remember the crying room, although in my memory there was one in the old Glendora Theatre at Glendora Ave and Foothill too. Can anyone confirm?

I remember working this booth. The regular projectionist was handicapped and I drew the assignment when he went on vacation. The booth was set up to accommodate him so it was a bit awkward. I became a favorite here because when he returned, he said for the first time he came back to no complaints. I filled in for him anytime he wanted time off.

I also remember coming one day and the cops were there. Seems the manager had not deposited the weeks receipts and took off to parts unknown. Showed a lot of Disney stuff here on Matinees.

The Covina Theatre opened December 19, 1921 with “Bits of Life.” In January of 1948, Western Amusement Circuit took on the theatre on April 23,1947 giving it a new look including its new triangular marquee and entirely new look interior. In 1955, the theatre got another interior redesign and was showing widescreen films.

General Cinema took on the venue changing its name to the Covina Cinema which it held for most of its next 25 years under GCC, Century Cinema Circuit and for much of its independent operation. The Covina Cinema was a main reason cited for a local X-rated ordinance passed in 1978 trying to zone the playing of adult films. The location played the Rocky Horror Picture Show at midnight in the 1980s and briefly returned to the name Covina Theatre. It changed back to the Covina Cinema and appears as though its cinematic days ended in the summer of 1992 when ads dare discontinued. In 1994, the venue was refreshed and continued with live presentations as the Covina Valley Playhouse. It was razed in 2005 after more than 80 years of vibrant entertainment to the community.