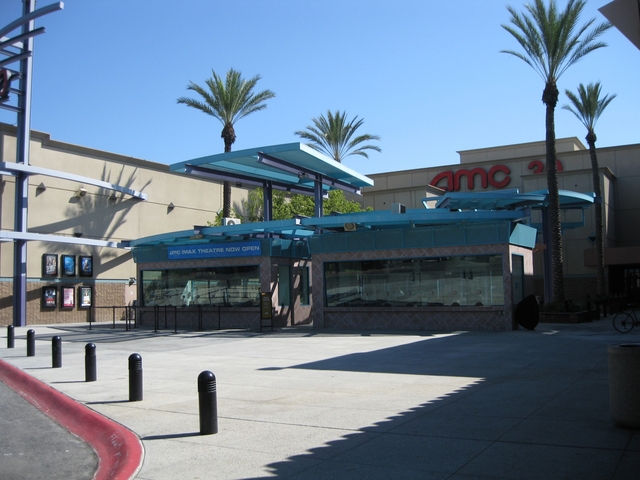 The AMC Covina 30 opened on Friday February 13th, 1998 and was immediately billed as the biggest theatre in the San Gabriel Valley. It opened in the Covina Town Square at the corner Of Azusa Avenue (CA SR 39) and Arrow Highway.

The theatre’s construction was plagued with a large delay when the construction crew tearing down the Sears Department Store’s basement hit a pipe with methane gas. One worker was killed, halting construction.

The AMC Covina was not an immediate success. Faltering attendance plagued the theatre for the first years, and it was not until two summers later that it became the busy theatre it was meant to be.

This theatre did cause the closure of the So Cal Chain’s Eastland 5, and Fox 3 (which for a time became an Indian film house) plus the Edwards Foothill 10 (now a Regency Theatre) and Mann Glendora 6.

This theatre has 13 theatres on the north side, and 13 of on the south wing. All ranged in size from 75 seats to 250 seats. The four large theatres were located in the middle with the main concession stand, two auditoriums with 475 seats, two with 375. It had a total of 4,500-seats It also has a nice upper mezzanine that looks down on the lobby doors. It is also in the same styling as many AMC megaplexes built around the same time.

Sound wise, all 30 feature SDDS. Theatres 15,16, and 23 had DTS Readers, and theatre 16 was the only one with Dolby Digital, which was upgraded to DD-EX when “Phantom Menace” opened.

13 of the screens were closed down in early 2011 and the current seating capacity has been reduced to 3,129.

Due to declining business, AMC has apparently closed one wing of the the theater and currently running it as a 17 plex. No plans on what they plan to do with the closed wing. This theater has suffered attendance decline since AMC opened their Glendora 12 a few miles away.

Also, as of September 2011, businesses are leaving the center like rats from a sinking ship. PetSmart and Michaels both relocated to West Covina. The only “new” business is Lowe’s replaced Home Depot with the last year.

I remember going to the Sears with my parents when I was young, back before all the Sears and JCPenny’s attached themselves to malls. I can still smell the popcorn and rubber. They had a popcorn/candy counter in the Sears near the tires and Craftsmen tools department.

I Saw my first movie here

I Don’t remember my first experience but i do know what movie it was (Monsters Inc.). AMC Covina is a great theater, Big Screen with THX Surround Sound (At least i think this theater used THX once).I Saw Tons of great movies here. The Spongebob Squarepants Movie, Transformers, Spider-Man 3 (Which was the only time i remember that they sold the snacks and food in the auditorium before the pre-show), Indiana Jones 4, I Haven’t been here since 2010 (it had an IMAX by then?)I Plan on coming here again soon though.

Any one know why this is now a 17 plex? Thanks!

It’s been somewhat common for these AMC 30-plexes to have one wing blocked off leaving only the 13-screens in one wing and the large four screens in the lobby. 30-screens is just too much to program; not enough butts in the seats.

Judging by available showtimes on their website it seems this has happened also at the Deer Valley 30 in Phoenix, AZ. I know when Regal took over AMC’s Cantera 30 in Warrenville, IL they did the same.

Those that remain 30-screens have been turned into a hybrid of regular and Dine-In theatres.

wonder if this theater will get remodeled like the one in Phoenix ?