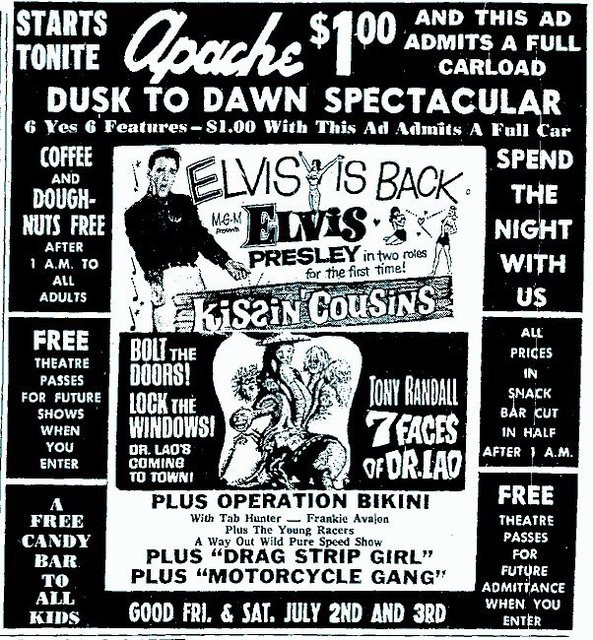 The Apache Drive-In opened on May 12, 1955. Opening night double feature was “Seven Angry Men” and “Santa Fe Passage”. Car capacity was 1,200. In July 1974 two move screens was added. The Apache Drive-In closed in 1994 and was demolished the following year.

Here is a November 1972 ad from the Tucson Daily Citizen:
http://tinyurl.com/l5jqbo

Tucsonman’s ad is now gone, therefore I reuploaded it in the photo section as well as the ad for the 3-plex from July 19th, 1974.

Boxoffice, Aug. 5, 1974: “The Apache Triplex, the new three-screen version of the 20-year-old Apache Drive-In, was opened July 16 with a benefit showing of "The Great Gatsby,” “American Graffiti” and “The Mysterious Island of Captain Nemo.” … The capacity of the restructured drive-in is 1,200 cars, in contrast with the former 1,000 car capacity for the one-screen operation. There are now two smaller theatres, with 30x60-foot screens, and a third larger area with a 60x110-foot screen. … The late Harry Agron built the original Apache Drive-In and opened it in 1951. After five years, he closed half of the theatre and continued to operate the other half until 1966, when he sold the drive-in to the Cactus Corp. After operating it for five years, Cactus rebuilt the airer to its 1,000-car capacity in 1971."