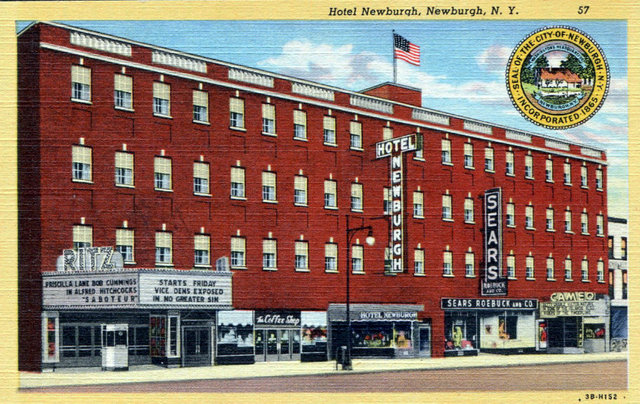 The Royal Theatre shared a block of Broadway with the Ritz Theatre and Broadway Theatre, and was the middle of the three. Like the Ritz Theatre, its lobby cut through the Hotel Newburgh. By 1950 it had been renamed Cameo Theatre and was operated by Liggett-Florin Booking Service. As far as I know, the Cameo Theatre was always a subsequent-run house, with double-feature programs changing several times per week. Its space was eventually taken over for the expansion of an adjacent Sears & Roebuck store.

By 2012, House of Refuge Ministries church operates at this address.

The Cameo is not demolished. A video store is in the space where it’s lobby used to be. i’m not sure what occupies the space that Sears took over.

It was also known as the Royal Theatre.

The 1940’s Cameo was the second-rate second-run, low-ticket-price theatre in Newburgh, trailing behind the Academy. At some point, it was operated by the same people who ran the Broadway Theater just up the block, and Ray Boyea was the manager of both for some time back then. Of all of the four movie theatres in Newburgh back then, I frequented the Cameo the fewest number of times. They also ran Western Horse Operas, most of which were relased by either Monogram, Columbia or PRC, rather than by Republic. Johnny Mack Brown and Charles Starrett (The Durango Kid) flicks always showed up at the Cameo. I do recall seeing a terrific double feature there in the late 1940’s: “San Francisco”, with Gable, Tracy and Jeanette McDonald, coupled with “Green Dolphin Street.” I think I also saw Ronald Reagan’s “King’s Row” there.

The Ritz, Cameo and Broadway can be seen in this 1952 photo:
http://tinyurl.com/ylovpbl

The Cameo had ceased operation by 1952, and was converted to commercial space.