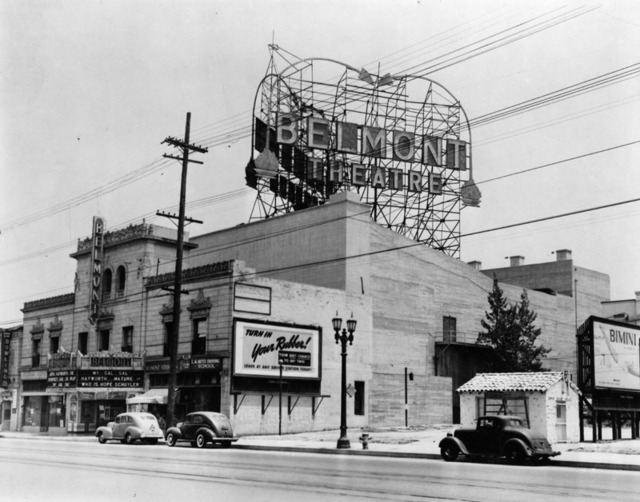 Slightly larger than the Fox Mesa Theatre, the Fox Belmont Theatre had a large, roof-top sign. It was opened by West Coast Theatres on March 2, 1926 with Matt Moore in “The First Year”. Marie Rambo played the organ (make unknown). In the old days, the theatre would even change the sign on a weekly basis to reflect the title of the film currently being showing at the theatre.

This theatre was on the east side of S. Vermont Avenue, just south of Beverly Boulevard at W. 1st Street. The Fox Belmont Theatre was still open in 1952, but had closed by 1955.

The Fox Belmont Theatre went through a major remodel during 1946. At this time the theatre was given a Skouras style remodel. The Theatre was operated by Fox West Coast Theatres chain.

This theatre was a favorite of Belmont High School students, the old-timers tell me. There is a great photgraph of the Belmont Theatre in the 50th Aniversarry Yearbook of Belmont High School. Sad to say that both are now gone….the beautiful Belmont Theatre was demolished in the 70s, (I remember driving by with my dad on the way to Norms in Hollywood), as was the most beautiful high school in Los Angeles, Belmont, razed in the late 60s/early 70s. L.A. Smith, the architect, also designed the Rialto, in my town, South Pasadena, and the Highland Theatre in Highland Park.

I know about the older Belmont High in LA, as well as the newer fiasco on Beaudry. Was there another Belmont High before that? What was the location?

Same site as the older Belmont. In the early years of Los Angeles, when the city was confined to a small area, many of the hills surrounding downtown had names…Colton Hill….Bunker Hill…Emerald Hill….Crown Hill…etc. , and during the 1880s, Crown Hill which was a bit beyond the city proper,,was where the Belmont Hotel was built. Within a few years it became a well known resort hotel, rivaling the Raymond in South Pasadena. The Hotel burned down in 1887,http://www.lafire.com/famous_fires/18871216_BelmontHotelFire/12161887_BelmontHotelFire.htm, ans on the site was built the exclusive Belmont School for girls. This lasted until 1920, when the city purchased the grounds to build Belmont High School. It was finished in 1923 and lasted until 1967, when, like so many other irreplacable , rare, and architecturally significant Los Angeles buildings, was razed to make way for the ugly square modernist structure that is there today, that which you referred to as
the “older Belmont”. Belmont was hands down the most beautiful high school in Southern California, and one of the finest examples of Italiante style in the country. The architect even designed a custom brick for the buildings, a long, broad and red brick, which gave the school a unique look, and, which to this day is known as ‘Belmont Brick’ whenever ordered by contractors and architects.Nothing like exists today…perhaps the closest would be Marshall High School in Silverlake/Los Feliz, but only as a pale example indeed. Take a gander yourself.
http://belmontalumni.tripod.com/
View link

Here is a look at the Belmont Hotel fire, hope the link works.

My father used to take me there on weekends during the early 60’s for double features, later, in high school, I went there on dates. It was a beautiful theater, even as a child I LOVED that place. It was so grand.