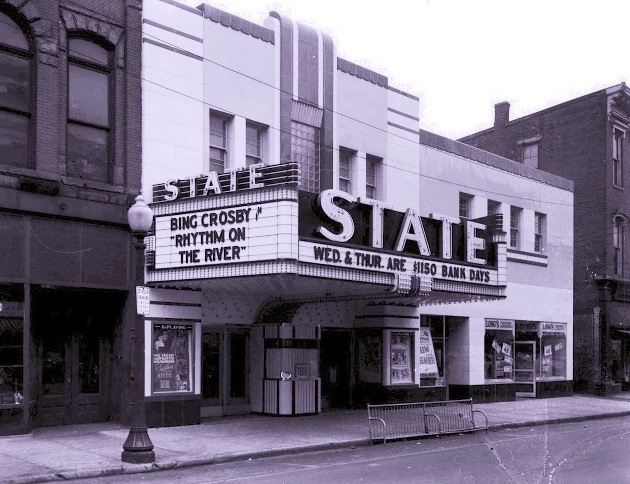 The State Theatre in Logansport, Indiana opened on June 8, 1940 with Irenne Dunne in “My Favorite Wife”. It had 1,074 seats. It was later twinned, and operated as a movie theatre until closing in 2012. It then became a live performance venue known as the Shindig which had closed by 2019. It has reopened as the State Theatre presenting live performances.

The State Theatre is listed on the Indiana and National Register’s of Historic Places.

A 1937 Logansport Pharos-Tribune also lists a ROXY, a LOGAN and a PARAMOUNT theatre there.

The June 15, 1940, issue of Boxoffice said that the new State in Logansport had opened on June 8. It was operated by the Alliance Theatre Corporation, also operators of the Roxy and Paramount at Logansport.

A photo of the auditorium of the State Theatre illustrated an advertisement for American Avion Theatre Chairs in the August 17, 1940, issue of Boxoffice. There were 1074 seats in the State. The architect of the theater was Irving M. Karlin, Chicago.

The Shindig is no more; long live the State Theater! The original name is back above the marquee and live performances are being presented. statetheatrelive.com