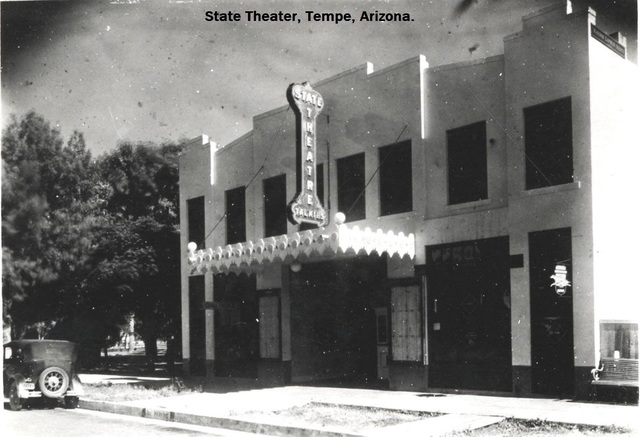 The Goodwin Opera House in Tempe, Arizona was opened in October 1907, when it had 500 seats. It was renamed State Theatre around 1919. In 1933, it was the first theatre owned by Dwight Harkins of Harkins Theatres fame.

Listed in Film Daily Yearbook;1941 and 1943 editions with a seating capacity of 460 and the status is ‘Closed’.

Has the State Theater been demolished? Has it been any other things beside theater?

The State was apparently not built in 1933 as the current intro of this page says. It probably dated from the 1920s, and maybe earlier. A May 12, 1969, Boxoffice item about the opening of a new Harkins theater said that Dwight Harkins “…took over the old State Theatre….” in 1933.

A March, 1998, Boxoffice article about the Harkins chain said that in 1933 Dwight Harkins, then an 18 year old college student, “…put a $50 downpayment on the lease on the State Theatre in Tempe….”

Also there’s a November 2, 1940, item about the College Theatre, then nearing completion, which says that when the new theater opened Harkins planned to dismantle the State. It’s very unlikely he’d have dismantled a theater that was only seven years old.

Nice photo of the Vertical under the heading “Talkies” must have been pretty old to have that on the sign.

A vintage photo of the State Theatre appears on page 60 of Mexicans in Scottsdale, by José María Burruel (Google Books preview.)

Something is wrong. Searching for information about the Goodwin Opera House in Tempe, Google gave me a link to this Cinema Treasures page displaying this result:

“This opened as the Goodwin Opera House in 1909 as a theatre for movies and stage shows. It was also known as the Tempe Opera House. It wasn’t called the …”Clicking on the link (no Google cache is offered), this theater’s “all comments” page appears with only five comments, and the one Google displayed is not among them. Did Google’s results come from a Cinema Treasures in an alternate universe?

Also, the photo TSLOEWS refers to in the comment of July 12, 2010, is probably the one I linked to in my previous comment. How did TSLOEWS see the photo before I linked to it? No link to the photo appears in any earlier comment, nor is it in the photo section for this theater. It must have been linked previously, but the comment with the link is gone, just like the partial comment about the Goodwin Opera House that Google’s search results displays.

Earlier, I was on another CT page (I’ve forgotten which theater it was) and it had only six comments, but after “Recent Comments” it said “view all 12 comments” and when I clicked the link there were only the same six as on the main page.

Stuff is going missing! What gives?

I noticed that some photos of theaters in Terre Haute, Indiana have gone missing in the last month or so.

There’s definitely something going wrong. I’d notify support about the issue, but my outgoing e-mail hasn’t worked for ages. I’ll just have to hope that Ken Roe sees the comment and lets Patrick know about the problem.

I will notify Patrick to take a look at this. He is away until just after the New Year.

Thanks, Ken. The missing comment is correct, by the way. The State did open as the Goodwin Opera House, but before 1909. I found it listed in the 1907-1908 edition of Henry’s Official Western Theatrical Guide, with 500 seats. It was probably renamed the State in 1919, when Southwest Builder & Contractor reported that a new owner intended to remodel the Opera House in Tempe.