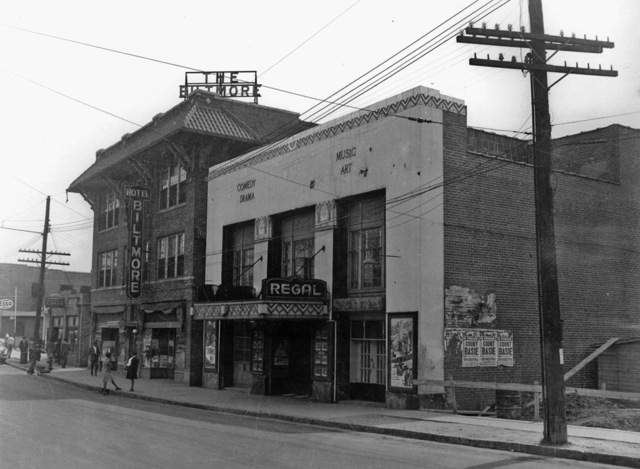 Another photo that I came across is the Regal Theatre in Durham, NC. Click the link below for a 1940’s photo. Its the short building in the middle. It was and African-American theatre opened prior to 1940. It was demolished in 1977.

The Regal Theatre was the one of several moviehouses in the Durham area that catered to the African-American community during the heyday of the 1930’s and 1940’s all the way to the 1950’s and 1960’s.
The theatre remained a business magnet for Durham’s black community and remained so until the late 1960’s,when the theatre was closed due to urban renewal.

There was also a African-American drive-in theatre located on either Cheek Road or Fayetteville Street that cater to black audiences during the 1940’s and 1950’s that is not listed on this site. During the 1940’s,the 1950’s and part of the early to mid 1960’s,several theatres in Durham were segregated,and most of the theatres along Pettigrew Street and in other section of the city catered to blacks.
All that changed in 1963,when Durham integrated all theatres and businesses.

Learn more about the Regal from the Endangered Durham blog entry.

George Logan built and operated the Regal, a 500-seat theater that offered films with all-black casts on Tuesdays and Wednesdays, and westerns on Mondays and Thursdays. Logan was a competitor to Frederick â€œMovie Kingâ€ Watkins, who owned 16 African-American theaters across the southeast region, and who had already opened the Hayti-based Wonderland and Rex Theaters.

Prior to becoming a movie house, the Regal had provided a variety of live entertainment and held performances by Duke Ellington, Cab Calloway, and Count Basie. Along with its next door neighbor, the Biltmore Hotel, the Regal provided a place for Durhamâ€™s black community to engage in social and cultural exchange â€" with each other, and with traveling musicians and artists.

At 12:30am on Monday, June 22, 1970 this movie house was bombed with ammonia dynamite. The explosion â€œdamaged the front of the theater building and shattered windows in two adjoining firmsâ€, according to the following dayâ€™s Durham Morning Herald. The blast also shook the car of two Durham officers and an SBI agent who were in the area on another investigation. No injuries were reported. The Morning Herald article included the following passage:

The Durham Chapter of the United Klans of America at their regular meeting Monday night voted to â€œoffer a $100 reward for information leading to the arrest and conviction of the party or parties responsible for the â€œbombingâ€, according to CP Ellis, chapter president.
Ellis said, â€œWe do not agree with this type of destruction.
â€œWeâ€™re serious and thereâ€™s a hundred dollars waiting for anyone who comes up with the information,â€ he said.

CP Ellis would eventually resign his position as Exalted Cyclops of the Durham KKK in 1971, after working alongside and forming an unlikely friendship with Ann Atwater, a black community activist. This relationship is detailed in Osha Gray Davidsonâ€™s 1996 book, The Best of Enemies.

The theater was demolished in 1977 as part of the Urban Renewal plan for Hayti.