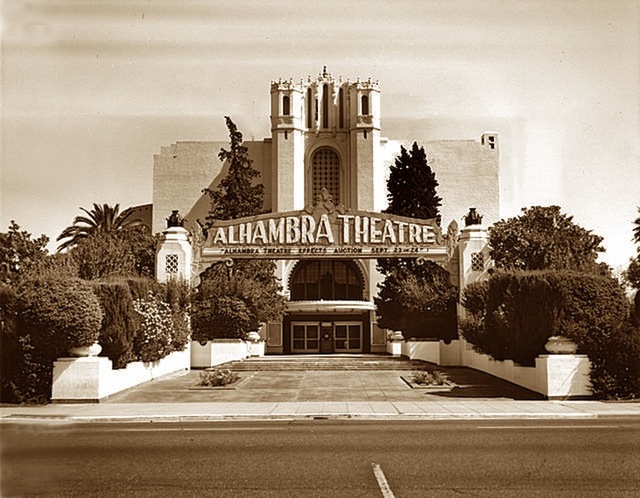 Moviegoers once entered this theatre, known as the ‘Showplace of Sacramento’, through a beautiful garden with fountains. So great was its splendor that the City of Sacramento even renamed adjacent 31st Street ‘Alhambra Boulevard’ in honor of the theatre. The Alhambra Theatre was opened September 23, 1927 with Rod LaRocque in “The Fighting Eagle”. It was equipped with a Robert Morton unit 11 ranks organ.

Today, the only remnant of the Alhambra Theatre is a one story fountain and a plaque located on the side of the Safeway’s parking lot.

I often wondered, for years, what happened to the “save the Alhambra” donation money that the people in Sacramento put into the fund back then to save it.The Alhambra obviously was not saved. So where or who got the money? There are pictures of the interior around. I saw one in the local PBS documentary “Sacramento:a nice place to live.” I will try to capture the picture and upload here.

I was also a part of the protest movement. Most everyone in our group (The Magic Theatre) joined. It was a sad day when we lost.

I was only 2 when this was torn down but what a magnificent building! I have heard a lot of long time Sacramentians talk about the drama that surrounded destroying this theater and the movement of trying to save it. Why was such an old and historic building torn down for a grocery store?

I booked the theater in it’s last year and it was spectacular and if I remember correctly it did have D-150.

I saw Fantastic Voyage there as a kid. It was the “go to” event for birthday parties. I was very sad to see it torn down and to this day will never shop at a Safeway.

Can anyone confirm what the last film showing at the Alhambra was? I saw Nicholas and Alexandra in late 1972. I believe I was there on the last night before they turned out the lights. Grand old place, for sure.

The last movie shown at the Alahambra Theatre before it closed on September 4, 1972 was a double feature (A Man for All Seasons and Nicholas and Alexandra).

Scroll down to the “Sacramento Trivia” section, Question 10.

I don’t believe D-150 was ever installed at the Alhambra although it possibly was planned to do so. United Artists Theatres did build a D-150 house in the Sacramento suburbs (Carmichael) named Cinema 150 (later Crestview Cinema), very similar if not identical to it’s identically named D-150 theatre in Santa Clara CA. That Carmichael theatre opened in September 1966. Norelco DP70 projectors were initially planned to be installed there but never were, so that house remained 35mm only until closing day.

The Alhambra did have 70mm (Norelco DP70) capability and showed a few films including “My Fair Lady” in that format, but all on it’s flat screen.

We ask for your memories, photos and ephemera, a tease of things to come in our documentary now in production, Alhambra: Sacramento’s Palace of Fantasy. PLEASE SHARE THIS VIDEO! Thanks. Contact us at: https://vimeo.com/220408233