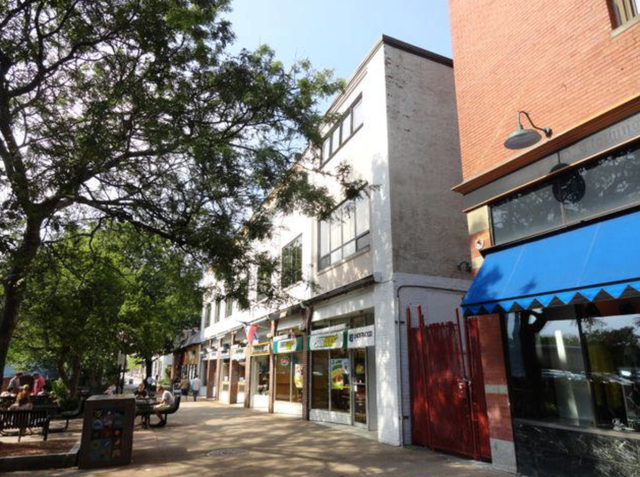 This theater, built in 1915, was in the building on Vaughn Pedestrian Mall that currently houses the Subway restaurant. It was completely gutted and turned into offices in the 1950’s. It is behind the building which once housed the Arcadia.

The January, 1920, issue of trade journal “The American Organist” has a directory listing organists, mostly in the northeast. Among them is Alexander Bilbruck, organist at the Olympia Theatre, Portsmouth. It notes that until 1919 he had been organist at North Congregational Church in the same city.

The Olympia in Portsmouth is listed in the 1942-43 Motion Picture Almanac as part of the Maine & New Hampshire Theatres Co. of Boston. They also ran the Colonial in Portsmouth at that time.

Oddly, in the same 1942-43 edition of the Motion Picture Almanac, the Olympia and the Colonial in Portsmouth are also listed as being run by John Ford Theatres of Maine, a Paramount affiliate. I suspect that one circuit must have sold them to the other in 1942.

The Internet says there is a Subway sandwich shop at 29 Vaughan Mall. Unless Subway has moved since the introduction for this theater was written, that must be the address of the Olympia Theatre’s building. Google Street View only provides views of Vaughan Mall from the north and south ends.

A photo of the Olympia’s auditorium can be found at this link.

The Theatre Historical Society archive has the MGM Theatre Report for the Olympia; it’s Card # 509. Address is Vaughn St. There is an exterior photo dated May 1941. Condition is Fair. The report says it’s over 15 years old and was showing MGM movies. There were 598 orchestra seats and 400 balcony, total 998. The MGM agent filled out reports for the Olympia, Colonial and Arcadia in Portsmouth, but the Music Hall/Civic was not included. Perhaps it was not presenting movies in May 1941.