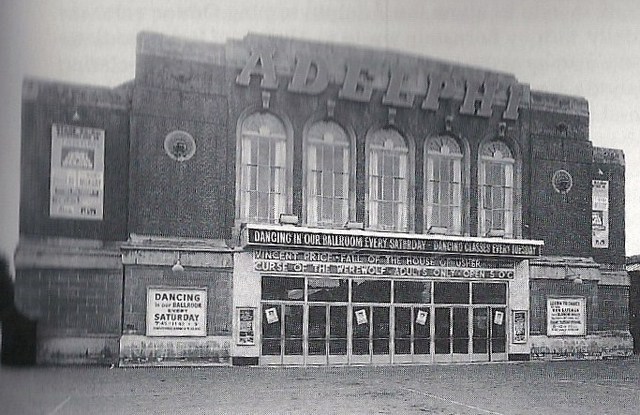 Built for and opened as an independent cinema by a company named Slough Playhouse Ltd. It opened on 17th February 1930 with Arthur Lake in “On With the Show” plus a stage show. Designed by noted cinema architect Eric Norman Bailey from nearby Maidenhead, the theatre was set well back from the road and had ample car parking space. Seating in the auditorium was for 1,398 in the stalls and 644 in the balcony. There was a large stage, a Christie 3Manual/8Rank theatre organ which was opened by Bruce Wendell, plus a café and a large ballroom.

The Adelphi Theatre was taken over by the Southan Morris Cinemas circuit on 29th May 1933 and they quickly passed it on to the Union Cinemas circuit later in 1933. In 1936 the Christie organ was rebuilt by Compton organs and had a melotone added, plus an illuminated console surround.

In 1937 Union Cinemas were taken over by Associated British Cinemas (ABC) and they operated it until 1st February 1953 when an independent operator briefly took it over. On 31st March 1953 it had been taken over by Granada Theatres and they had the organ console altered to look like consoles in their other theatres. The stage was brought into use and artists such as Roy Orbison, The Beatles, Little Richard, Walker Brothers and Chuck Berry appeared here.

The Adelphi Theatre closed on 21st January 1973 with Sieghardt Rupp in the 1969 German film “Sex is a Pleasure” (Komm, liebe Maid und mache). It was converted into a Granada Bingo Club which opened on 18th May 1973. From May 1991 it was operated as a Gala Bingo Club. In 2018 it became a Buzz Bingo Club.

The Adelphi is still standing (in use for bingo) but is located much further along Bath Road than indicated in this listing. Try SL1 3UA on StreetView – south side of the road, adjacent to Adelphi Gardens (naturally).

Is the organ still there?

The organ is no longer there. The Granada ends are now on the Christie organ at Castle Hill Church Ipswich and some of the pipework is there too.