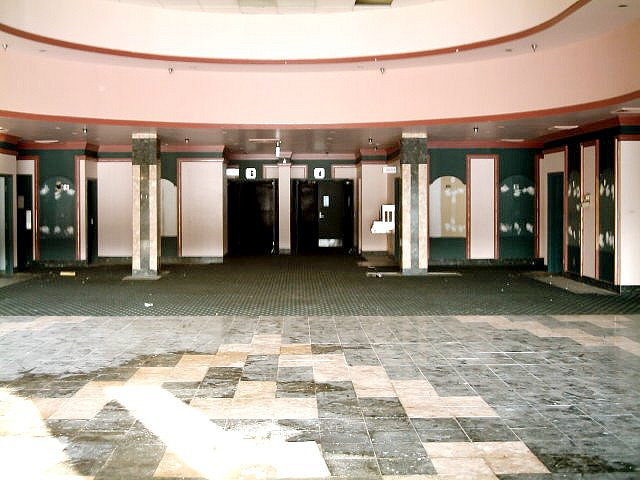 Opened on December 19, 1986, I believe that the Friday’s Plaza Cinema was the first theatre built under the Cineplex Odeon banner in the metro Atlanta area. Although this circuit had a less than stellar reputation in the city, it does deserve credit for both reintroducing atmospheric theatres to the Atlanta area and I believe, the first chain to have Dolby in all of its auditoriums. The Friday’s Plaza, Northlake Mall and the Merchants Exchange were far more appealing than the stale worked over mini cinemas that cluttered the area during the 1980’s and early-1990’s.

The Friday’s Plaza Cinema was closed in 2000. Together with most of the shopping center it was demolished in January 2021.

Fridays Plaza has undergone a beautiful renovation. My family enjoyed years of the cineplex! We often drive by to reminise on the good days. Hervys Chicken & Salad opened 2009 but is temporarily closed. A mens clothing store with very fine mens wear is coming soon. An upscale restaurant is also coming Jan 2011. The location is bad but the potential is great! We miss the old Friday Plaza!

The pictures bring back really good memories. Thank you!!

When I first got married, this was my “little cinema around the corner.” We could walk there and did quite a lot. It was a fun shopping plaza in the early 90’s and we were sorry to see it decline.

I always wondered if the folks from Cineplex ever saw this location before they agreed to open this location. Horrible traffic along a perpetual construction zone in a plaza anchored by a TGIF? Near the end the TGIF closed and became a strip club, the rest of the plaza fell on hard times as the remaining quality tenants left only to be partially replaced by some marginal operations. At the point this opened Cineplex was building some decent multiplexes in bad locations, the Town Center in Kennesaw was a similar location in both layout and questionable location. I’m guessing many of their decisions were made in Toronto by people who depended on developers.

I agree that it was a terrible place for a theater, because, even in 1990, when we lived there, the neighborhood was starting to decline. Later, DeKalb County- it it’s wisdom- started tearing up parts of Peachtree Industrial Blvd, making access to Friday’s Plaza very difficult to anyone outside of the neighborhood. I can imagine that the initial location draw was the thought that it was located close to Dunwoody, near several housing developments and apartments and not too far from Buford Highway, still a major area at the time. Unfortunately, the area went downhill fast. We moved there in 1990 and were gone by early 1993 and we were far from the only ones.

This opening on December 19th, 1986. Cineplex Odeon placed a full-page ad, which had the same design as Le Fabourg in Montreal, on that day. 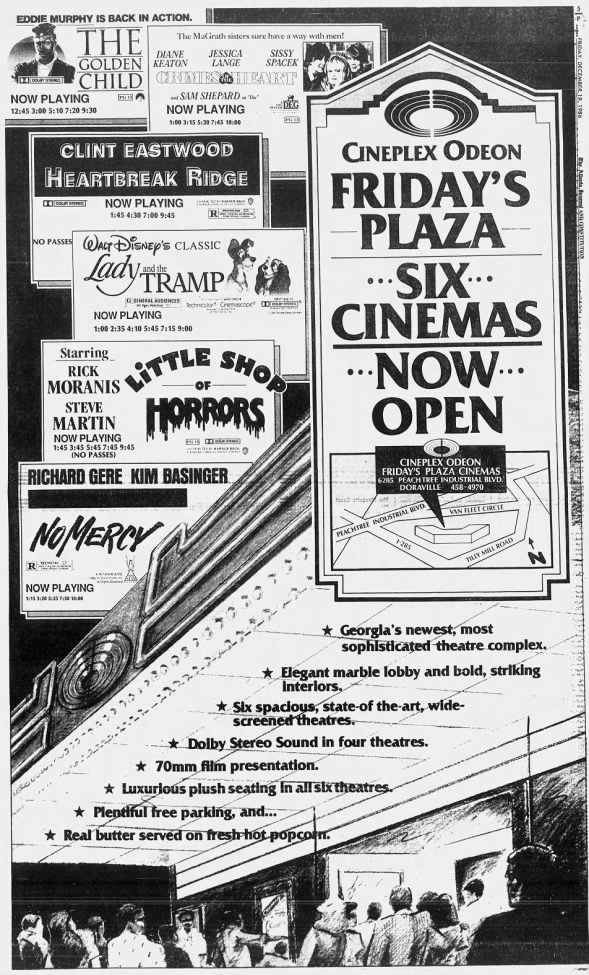 Passed by last month and from PIB I could see that the entire shopping center seems to be in the process of being demolished. The left wing almost to the theater was completely gone and since the entire site was fenced off it looks as if the entire center is on its way to the landfill. So, just like the GCC Gwinnett Place 6, this place sat empty (20 years), longer than it was in operation, (14 years).

I was never inside here, or in any of the Cineplex Jewell Box locations, but they certainly seemed to be nicely appointed. Unfortunately they were built just as the multiplex business model was about to be destroyed by the coming of the 16-24 screen megaplex builds starting in the mid 90’s. Along with this one and it’s Southlake lookalike, the GCC Merchants Walk, Parkside, and Hairston 8’s were the last of this type, with Hairston opening in December 1988.

All are gone now except Merchants which has been expanded to 14 by its current operator, Georgia Theater Company and the Parkside which was saved by George Lefont and has recently been rebuilt by its new owner as a theater / restaurant / bar operation.

I have been to two of those “Jewelbox” cinemas, both in Downtown Montreal. One is now a medical clinic and the other are classrooms for Concordia University. have a look at this book https://archive.org/details/cineplexodeonfir0000burn

This cinema, along with most of the shopping center it was in, was torn down in January 2021.