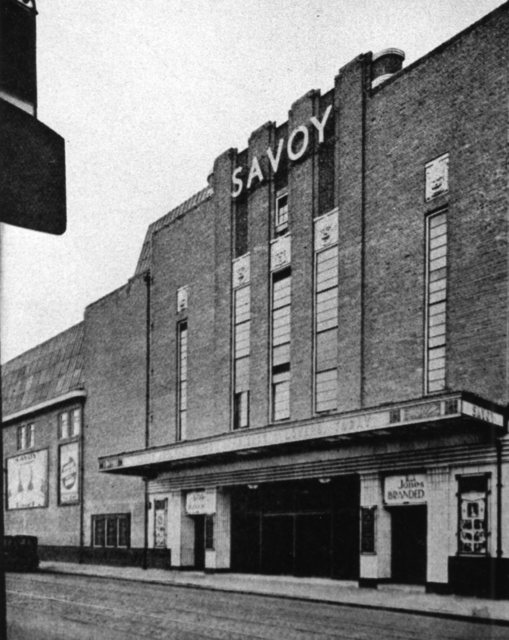 Located in the southwest London district of Wandsworth. Built for and operated by Associated British Cinemas (ABC), the Savoy Cinema was designed by ABC house architect William R. Glen and was one of his earlier commisions for the circuit. The auditorium ran parallel to the road which created a bland brick facade. Inside the auditorium, seating was arranged for 1,158 in the stalls and 1,008 in the balcony. The proscenium arch was positioned under a large canopy which extended forward into the auditorium.

It opened on 22nd February 1932 with Constance Bennett in “Common Law” and Sue Carol in “Graft”. On stage was Alan Green and his Wonder Band. Unfortunately, the Compton 3Manual/6Rank theatre organ installation was not ready in time for the opening.

It was closed in January 1945 due to damage from a rocket bomb and re-opened after repairs on 7th January 1946. It closed to films briefly from 8th March 1958 when wrestling was staged one night a week. This closure was blamed on the crippling Entertainment Tax which made large cinema buildings like the Savoy un-profitable at that period of time. The cinema industry were granted a tax relief and the Savoy re-opened again on 18th May 1958, using the stalls seating area only and playing split week programmes. Final closure came on 6th June 1959 with Frank Sinatra in “Some Came Running” and “Edmondo Ros Half Hour”.

An early casualty to the downturn in cinema admissions it was just too big a cinema, in a rather rough area and was demolished in April 1960 and currently a Shell service station is on part of the site.

Is this now the site of the Shell Petrol Station, called ‘Savoy" ? Are there any pictures available?

I have added three photographs of this cinema. Living in Battersea (this theatre was built virtually on the border of Wandsworth with Battersea)in the 1950’s this cinema was a regular fixture for me.

Message for Barrowboy: Hi, can I put your picture of the Savoy Cinema (the main one showing the entrance) on my web page blog ?