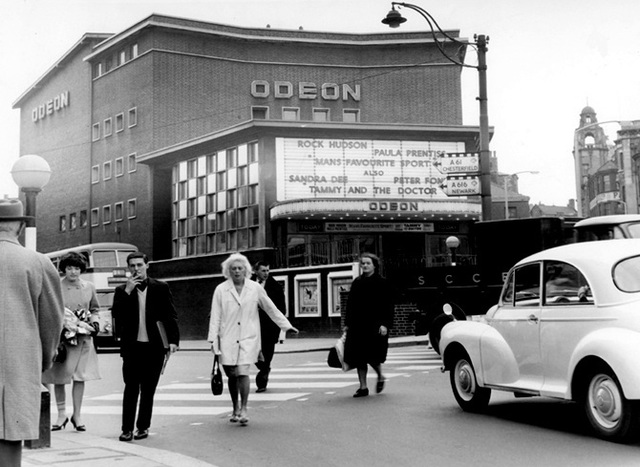 Construction work began in March 1939 on a new Odeon Theatre for the Oscar Deutsch chain Odeon Theatres Ltd. Plans from architects Harry Weedon and W. Calder Robson had been approved for a 2,326 seat cinema with shops and an office block. The main steelwork was in place when war was declared and construction was halted.

After the war ended building work re-commenced, but the plans had been re-drawn by architects Harry Weedon and Robert Bullivant for a 2,319 seat cinema without the shops and office block.

The Odeon opened on 16th July 1956. Seating was provided for 1,505 in the stalls and 814 in the balcony. Lighting in the auditorium was via three rows of light fittings hanging close to the ceiling and from concealed lights in the two decorative panels each side of the proscenium opening.

The Odeon was equipped to screen films in the Todd-AO process and “South Pacific” and “Cleopatra” had long runs here. “The Sound of Music” was the last film to be screened at the Odeon and after running for 14 months it closed the cinema on 5th June 1971. From September 1971 it re-opened as a Top Rank Bingo Hall. It was later re-named Mecca and operates today as a Mecca Bingo Hall.

Two internal pictures here from 1988 as a bingo hall-

‘The Sound Of Music’ opened at the Odeon Sheffield on Sunday 3rd October 1965 and ran until February 1967. ‘Khartoum’ immediately replaced it.Other films shown on a Road Show basis after ‘Sound Of Music’ to those already mentioned by Chriso were ‘Thoroughly Modern Millie’, ‘Doctor Dolittle’, ‘Custer of the West’,and ‘Chitty Chitty Bang Bang’. Two TODD AO films were also brought back for one week runs – ‘Oklahoma!’ and ‘South Pacific’. The support with ‘Oklahoma!’ was ‘The Miracle Of TODD AO’.

Detail of the decoration on the splay wall beside the screen here:–

For just under two years (July 1969 to June 1971), Sheffield had four excellent 70mm screens, The Odeon, the ABC and the two new auditoria at the Gaumont. Contrast that with today’s pathetic offerings.