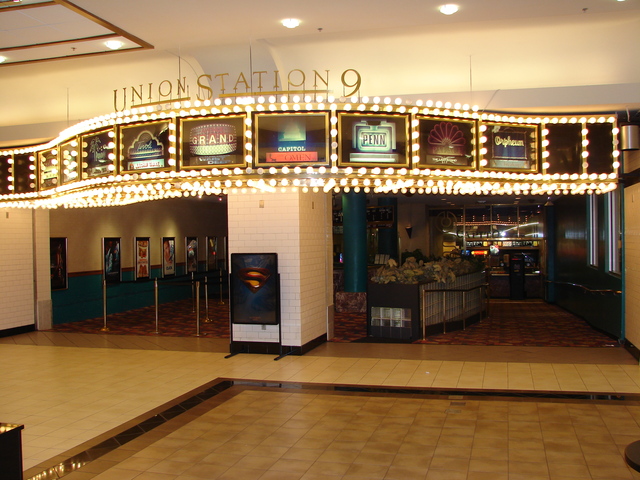 This movie theater opened in the basement, the food hall, of Union Station, on November 18, 1988. The marquee names each auditorium after a movie palace in Washington, D.C., most of which are gone: the Capitol (only the exterior stands), the Palace, Orpheum, Avenue Grand, Penn (only the facade survives), Roxy, Paradise, State, and Tivoli (recently reopened but not as one huge movie palace).

The Union Station has long maintained large crowds, especially because downtown lost almost of its movie theaters by the time it opened. However, the recent opening of the larger megaplex, the Regal at Gallery Place, may have made this pre-stadium seating house redundant.

In December 2005, it was announced that as part of the merger with Loews, this theater would be spun off to another operator, and the theater was operated by Phoenix Theatres.

It was announced in September 2008, that the theatre will close sometime soon because it is no longer profitable. It was closed in October 2009 and the space has been converted into a Walgreens and a Wendy’s restaurant.

Anytime a theatre closes it’s a shame. This is a particular shame because of the failure of a theatre in a mixed use facility where going to the movies was part of a travel, shopping, dining, after work experience. And the theatres were an above average of their time multiplex.

I ran restaurants in Union Station 10 or so years ago and the theatres were business drivers and part of the lifeblood of the complex. We ran some classic movie nights together – Citizen Kane, Casablanca and Some Like It Hot. I took over a theatre one night for the team – Robert de Niro in The Fan – ok great idea not so great movie. And took a break for myself to see such classics and non classics alike as Usual Suspects, Leaving Las Vegas, Cable Guy, White Squall, Mission Impossible, Species, The Quick and the Dead, Extreme Measures, Ace Ventura 2 and The Quest. The AMC management at the time was positive and proactive and much as we could joke about the level of the movies sometimes, there was a theatre there.

I remember taking calls the day of the blizzard asking if the theatre was open and sure enough with a skeleton crew they opened for a couple of shows.

Funny. Or, I guess more intriguing. I saw a movie here once, while on vacation to DC. I didn’t recall that the theater had just opened, but it was opening week. I never got around to visiting the theater again when I visited DC almost 4 years ago. Now I wish I had.

Have these theatres been converted to retail, or are they sitting empty waiting for another chain to reopen them?

Has anything ever happened to this space? Any new restaurants or retail gone in?

I was there about a month ago having a meal in the downstairs food court and all I saw was the original entrance still boarded up.

As I recall about the theater this was the only in-town AMC theater to feature 8-channel SDDS sound on the Ave. Grand screen. I saw ‘Lost in Space’ and ‘Heavy Metal’ (reissue/SDDS-8) and they sounded amazing!

I recently saw a Washington Post ad for ‘Arachnophobia’ (1990) that denoted that it’s 70mm run was here at Union Station; that bit of information totally went unnoticed by me – who knew?!

Being stuck at home due to the corona virus and feeling a touch nostalgic, I’ve been virtually revisiting some of my favorite venues of the past on CT. I’ve discovered yet again, some of my comments from the site are gone like here.

After buying tickets, one gets the feeling of walking gradually on a decline to the theaters. The restrooms were awful, although not as bad as the ones in the food court.

I believe I started visiting this place on occasion since the late 80s. I know I saw Star Trek VI (1991), with a co-worker in the Grand because it was the best/largest place to see the Star Trek movie in the DC area, and the first one aside from the first one, that wasn’t in 70mm ..but at least it was in THX. I distinctly remember an intro by, presumably, the Manager who was bald and made the often stated but incorrect belief (imho) that the even numbered films are better than the odd ones.

I saw the Eddie Murphy remake of The Nutty Professor (1996) not in the Grand but in one of the auditoriums further down, but in the same row on the left. The memory that sticks in my mind was a sell out with a racially diverse crowd. When they talk about movies being communal and should be experienced with others, this movie is a great example. The club scene with Jada Pinkett Smith’s character and Buddy brought the house down with collective laughter and enjoyment.

LA Confidential (1997) I remember seeing this here because I had a date that went bad. LOL. We enjoyed the movie but couldn’t agree on what to eat. So we ended up just eating separate meals purchased from two different vendors. I paid for both. :P I remember walking around and around the food court undecided what to buy and coming back, I saw my date’s neck stretched, looking for me, as if I had left the place. :)

Can’t remember if I saw anything here in the 00s, prior to its closure. My movie stub collection is partly faded due to the cheap ink used to print them back in the day so that is no help now. :(

Just uploaded the grand opening ad in the photos section

I found out that the space has been turned into a Walgreen’s with that store’s entrance on the other end of the area from the theater’s entrance. The theater entrance area is a Wendy’s and a boarded up space. I found out from this video: https://youtu.be/IN0ohdR3Rss?t=1609