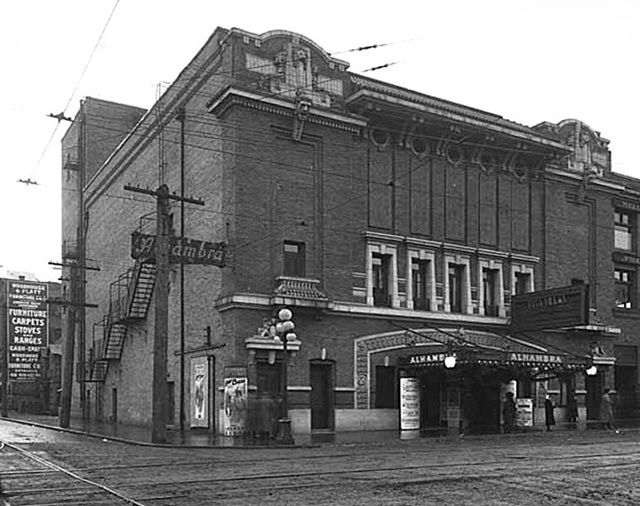 The Alhambra Theatre opened July 12, 1909, at the southwest corner of 5th Avenue and Pine Street. Its auditorium sat 1,600 people. It started out as a movie and vaudeville theatre, but in 1911, owners C.S. Jensen and John G. von Herberg made it solely a movie theatre. In 1916 it was taken over by the Orpheum Circuit, becoming their 3rd theatre in the city. A year later in 1917 they moved into the Moore Theatre. The Alhambra Theatre was renamed Wilkes Theatre and was back to housing films and vaudeville shows.

It closed in 1922 and the building became Best’s Apparel and later Nordstrom.

The Alhambra Theatre began its life as a legitimate house operated by the Shuberts. The September 16, 1916, issue of The Moving Picture World told the story up to that time:

“SEATTLE, Wash.—The Alhambra, one of the big downtown moving picture theaters owned and operated by Jensen & Von Herberg, is to be opened with Orpheum big time vaudeville on September 24. Carl Reiter, for seven years the manager of the Orpheum here, and last year manager at Portland, will be the local executive in charge. Vice-President L C. Brown and Secretary S. Lansing, of the Orpheum Theater Company, San Francisco, have been here several days negotiating. The lease covers a long period of years, and The Alhambra will be refinished outside and in. Two performances will be given daily.

“The Wilkes Stock Company has retained the lease on the old Orpheum theater and will continue there through the winter.

“This is by no means the first change that the Alhambra has seen. It was first opened in 1909 under Schubert management. Since then it has run the gamut of uses to which a theatrical building may be put. From legitimate to vaudeville, then a combination of vaudeville and pictures, then, as the first theater acquired by Jensen & Von Herberg, recognized as one of the finest and best motion picture theaters in town. Early last spring its bill was changed again to one of vaudeville and pictures and now comes this last change.”The “last change” turned out not to have been the last after all. Orpheum’s lease was to run for seven years, but the Orpheum circuit soon moved its vaudeville shows to the Moore Theatre, and the Wilkes Stock Company, which had displaced the vaudeville at the Orpheum Theatre, ended up taking over the lease on the Alhambra and renaming the house for itself.

The Alhambra Theatre was designed by one of Seattle’s leading architectural firms of the period, Saunders & Lawton. Charles Willard Saunders and George Willis Lawton were partners from 1898 to 1915. Their last major project as partners was the Masonic Temple on Pine Street which, in 1980, was converted into the Egyptian Theatre by the Seattle International Film Festival. Prior to entering the partnership, Saunders had designed the Seattle Theatre, erected at Third Avenue and Cherry Street in 1892-93.

Too bad such a beautiful building was converted to other uses. The Coliseum was built across the street maybe. That might have been a reason. Does anyone have interior pics of the Alhambra?