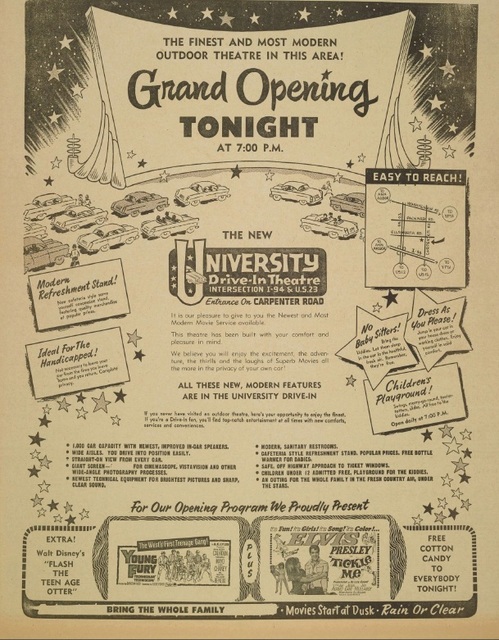 The University Drive-In was a big single-screen theater which opened on July 9, 1965 with Elvis Presley in “Tickle Me” & Rory Calhoun in Young Fury". It was located between Ann Arbor and Ypsilanti, Michigan. It was demolished in 1985 and a Showcase Cinema was built on the site. The Showcase is still in operation in 2006.

This theater was part of the Butterfield chain, which ran numerous Michigan movie houses including the Michigan, State, Wayside and Campus in Ann Arbor…I don’t think they owned it, at least the operation was not directly supervised by Butterfield the way the other theaters were, but they did share ad space.

Around 1981 Butterfield sold out to a chain called Kerasotes, which may have been a factor in the University’s closure. Kerasotes didn’t last long either, and is mostly remembered for protests after they fired their union projectionists.

This one opened on July 9, 1965. Advertised car capacity was 1,000. The opening movies were “Tickle Me” with Elvis Presley and “Young Fury” with Rory Calhoun.

Dave Lounder THE DRIVE-IN THEATRE PRESERVATION SOCIETY TheDriveInGuys.com on August 11, 2020 at 3:52 am

The marquee was evidently saved by National Amusements – either the original, or a repro is on display at the chain’s Fairfield Cinemas in Connecticut, which was just PERMANENTLY CLOSED by National Amusements on Aug. 6, 2020 after a 26-year run. The company cites the Coronavirus pandemic as the reasoning behind the shuttering.