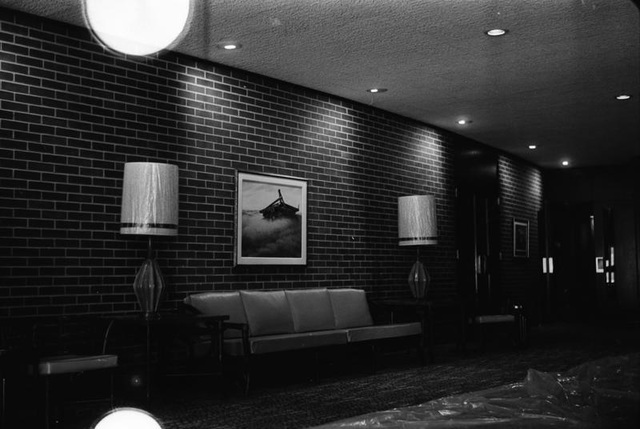 Opened for the Butterfield Theatres chain in 1968, the Wayside was designed by Louis Wiltse and could seat just over 1,000. The Wayside’s most famous feature was its enormous screen, measuring 56' by 24', at the time the largest indoor screen in the US.

The lobby was designed to resemble a comfortable (albeit with late-1960’s style decor) living room, with sofas, end tables, lamps and artwork.

In 1984, the auditorium was twinned, after Butterfield sold the Wayside to Illinois-based Kerasotes Theatres. In the five years that Kerasotes ran the Wayside Theatre, it was notorious for being poorly run. Kerasotes closed the theatre in 1989.

A year later, plans were announced to convert the twin into a brew-n-view style venue, called the Wayside Cinema & Drafthouse, but this fell through. In late-1991, the theatre was gutted and reopened as the Wayside Whirly Ball amusement center.

The building has since been demolished and a supermarket built on the site.

The theatre actually never housed a supermarket. It was torn down and replaced by a Farmer Jack supermarket and oil change store. The sign remained up for years. When the theatre was torn down I kept bricks from it as memories of the times I spent at the movies with my dad as a small child in the early 70’s.

Kerasotes quickly became notorious in Ann Arbor because the first thing they did was to sack all of Butterfield’s union projectionists and replace them with lower-paid employees. While there was a certain business logic in this (I don’t think the other chains in town used union projectionists, and the projectors were more automated than before) it caused a huge backlash. Picketers were a regular site at the State theater more than a year later. I’ve wondered if this happened at other locations…I mean, Ann Arbor is a liberal town in Michigan, but Michigan is a union state…

Lets go for the brew and veiw idea.

I remember seeing the original Terminator movie there, and I think Gremlins, while a student at nearby EMU back in the mid-1980s. I remember it in this era as being somewhat cheap & run-down.