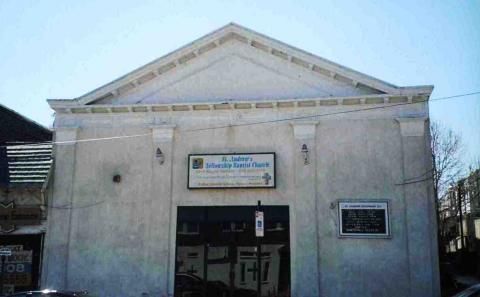 Opened in 1914 with a seating capacity of 480. When it first opened it was known as the Wayne Avenue Playhouse later being known as the Wayne Avenue Theatre. It was equipped with a Moeller 2 manual 6 ranks organ. It closed as a motion picture theatre on December 6, 1966 with Bob Cowan in “Sins of the Fleshapoids” & Jock Livingston in “Zero in the Universe”. It was later converted to retail use. In the late-1970’s and into the 1980’s it became a concert venue named Theatre on the Avenue. In October 1990 it was purchased by St. Andrews Fellowship Baptist Church who operate on the property today.

I have very fond memories of the Wayne Ave Playhouse. In the 50’s it was mainly a 2nd-run house for foreign releases. I remember vividly seeing “Diabolique,” and the Jacques Tati comedies “Mr Hulot’s Holiday” and “Mon Oncle,” and many others. In later years, the house was used on weekends for “Nickelodeon Nights,” a selection of comedy shorts, particularly Laurel & Hardy, and was very successful.

The Wayne Theatre, also known as the Wayne Avenue Theatre, was located at 4910 Wayne Avenue, about a block from the Happy Hollow Recreation Center. Opened in 1919 with a seating capacity of 480, it first opened as the Wayne Avenue Playhouse, with the name later changed to the Wayne Avenue Theatre. According to a newspaper clipping from the time, it was a “one-story motion picture theatre 46 x 138 feet located on the south side of Wayne Avenue, east of Logan Street, erected at a cost of $12,000”. It closed as a motion picture theatre in 1968. It was later converted to retail use. In October 1990 it was purchased by St. Andrews Fellowship Baptist Church and is today used as a church.

First saw Chaplin’s The Great Dictator here when it reopened in the US.

Built in late 1913, this venue opened as the Wayne Theatre in 1914. Owner Helen Albert gave the venue a refresh in 1920. It was later wired for sound to remain viable. The Wayne closed after 35 years of operation in June of 1949 at the expiry of a leasing period.

The venue reopened as the Wayne Avenue Theatre on November 11, 1950 showing British cinema and the film, “Kind Hearts and Coronets” with Joseph Conway of the Egyptian Theatre in charge. In early 1951, it was known as the Wayne Avenue Playhouse. It closed December 6, 1966 with “Sins of the Fleshapoids” and “Zero in the Universe.” It had a non-theatrical period as home to a car dealership next.

The venue returned as a live music venue in the late 1970s and into the 1980s when it was briefly known as Theatre on the Avenue. It then was sold for $65,000 and became a house of worship.