Little Theatre on the Bay (Official) 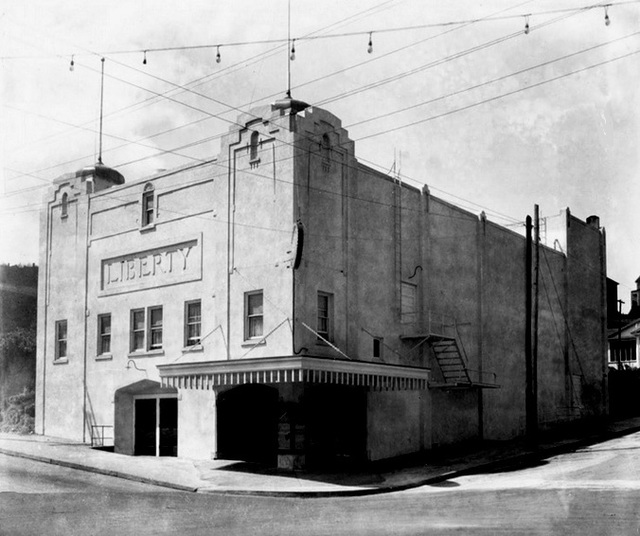 This theatre is operated by the ‘Little Theatre On the Bay’ acting troupe.

The Liberty theater was designed by Portland architect John Tourtellote. The 750 seat theater opened on April 20, 1924 with a Wurlitzer organ concert. The first movie was “The Fighting Crowd” plus a Little Rascal short subject called “Big Business”. A few years ago I attended a LTOB production of Grease. The seats must have been either the original ones or very old at that and weren’t very comfortable.
The New Liberty Theater as it was known in 1924 replaced the original Liberty Theater in North Bend which was originally called The Joy. The historical information is all from the Little Theater on the Bay website.

Some of these sites, not waymarking particularly, tend to come and go. I think photobucket has a better chance of sticking around without the link disintegrating.

I think I remember seeing the film Sasquatch, The Legend of Bigfoot here in 1976…but the IMDB says that film didn’t open until 1977, when I had left North Bend. Coos County was really into bigfoot in the 70s though, with “sitings” in the area regularly, so perhaps it wasome other film. Does anyone know if the Little Theater screened films in 1976? And if so, did they screen something about Bigfoot? Most of the other films I remember from that period (Grizzly Adams, King Kong, many Disney titles) I know I saw at the Egyptian but I’m 99% certainly this bigfoot film was at the LTOTB.

If anyone has any historic images of this theatre, I would be most interested in seeing them. I am the restoration consultant working with the owners to restore the facade (and eventually the interior too!) Thanks!

Little Theater on the Bay (LTOB) has been presented live shows at the Liberty since the late 1950s and recently embarked on a major capital campaign to update and restore the building. Phase 1, exterior repair and painting, was completed last month. Phase 2, to build new ADA compatible restrooms and get rid of the ugly Sani-Can, in now picking up steam. Read more at http://thepreserveoregonblog.blogspot.com/2015/11/liberty-theatre-north-bend-or-phase-1.html and check out the photos that I have added here.

Great this nice older building is alive and well. A new marquee would be nice and maybe a neon sign too. Great work keeping it going and restoration.

LTOB, that owns and operates the Liberty, has been busy raising funds to upgrade the interior and exterior. I’ve added a photo of the restored exterior painting, completed in 2015.