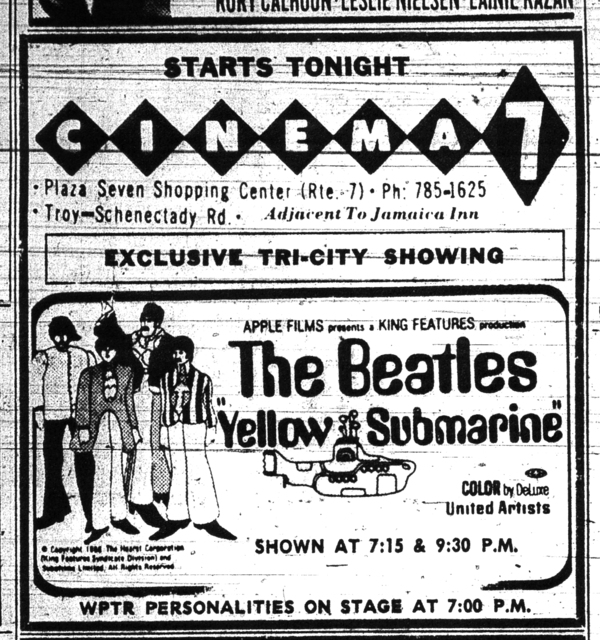 The Cinema 7 opened in 1968 and was touted as the ‘first shopping center theatre in the Albany area’. Opening attraction was “Barbarella”. It was a single-floor house with all seats on one level, with two aisles. The walls were draped with gold curtains and the small stage also had a functioning curtain right up to the end, covering the 50' screen. It was one of the first theatres in the Albany area to be fitted with Dolby Stereo, as it was a condition to play “Apocalypse Now”.

Cinema 7 was always a single screen, but was called “Cinema 7” because it was in the Plaza 7 Shopping Center on Route 7. For a good part of it’s early life, Cinema 7 was a roadshow and exclusive house. Loews held the lease on the place for most of its life (as part of the acquisition of Carroll’s/CinemaNational/USA Cinemas) and actually spent some upgrade money on the facility in the late 80’s. This was the first theatre I ever managed. The lobby was large with glass panels over the door providing lots of outside light. The concession stand was another 60’s original.

As multiplexes spring up all around it, then-operator CinemaNational turned Cinema 7 in to an “All Seats $1.00, All Times” second-run house. It was a huge success and most often sold out every weekend. In 1990, Loews had an initiative to shed all singles and twins in non-Metropolitan areas, and the Cinema 7 was leased to an independent operator who immediately raised the ticket price to $3.50. Right around that time, Hoyts turned their nearby Cine 10 (yes, with 10 screens) into an “All Seats $2.99” house, so the Cinema 7 took a big hit.

It limped along until 1993, when the landlord, Community Health Plan (who already turned the rest of the plaza into doctor’s and medical support offices) gutted the building and divided it into a two-floor setup. The ground floor became a day care center and the second floor was used for office space. Windows were placed in the mansard roof and auditorium side walls. A few years later, the landlord ceased operations altogether and the building was leased for office space. It still stands, freestanding in the center as always.