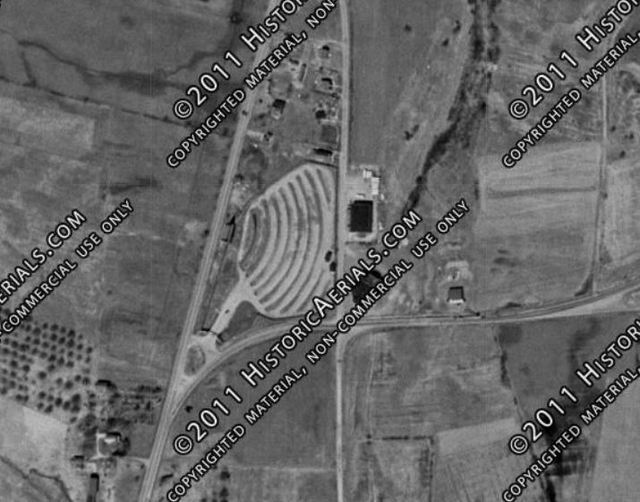 The Auto Drive-In opened on May 9, 1941 with Ginger Rogers in “Batchelor Mother” & Gene Autry in “Melody Ranch”. It was one of two drive-ins in Colonie, New York. It parked 465 cars making it that city’s smallest. It was owned by Fabian Theatres located in New York City.

The Town of Colonie encompasses the Village of Latham, where this drive-in was located. It was on Route 9, on the site of a shopping center that contains a Price Chopper supermarket. The Latham Drive-In (the Town of Colonie’s third—the other being the Mohawk) was located about 1/10 mile north on Route 9.

This opened as Auto Drive-In on May 9th, 1941. Its grand opening ad has been uploaded here.

In looking at the Goggle/Bing maps Rt.9 and Louden Rd. are the same. If you take the Rt. 9 out of the address it seems to work. I put it on the list for Ken to change.

When was this drive-in closed and demolished?

Historic Aerials shows that the Saratoga was still on topo maps in 1981 and 1988, but its 1995 aerial photo shows just hints of the ramps.

The Motion Picture Almanacs listed the Saratoga under Colonie. It was still there in the 1976 list but gone in 1977. New York Drive-Ins says its final season was 1971. Indeed, the Saratoga was in advertisements in The Troy Record in 1971 but I couldn’t find any for 1972.