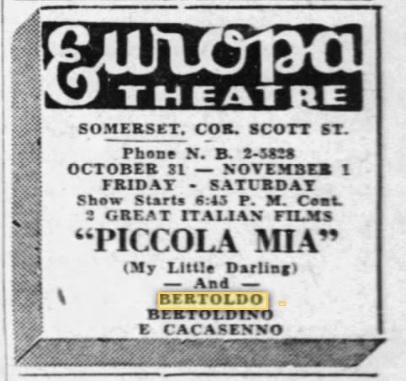 Listed as closed in the 1944 Film Daily Yearbook, as open in the 1951 FDY and as open in the 1956 FDY, where it is additionally listed as an art theater. I am not sure when this theater finally closed but it was before the mid 1980s. Today the site is currently being demolished and appears to be part of hospital expansion or parking lot plans.

I suspect the Europa was gone a lot earlier than the mid ‘80s. I was at Rutgers in the mid '70s and it wasn’t there. Until the mid '60s we lived about five miles away and we used to drive down Somerset Street to St. Peter’s RC church, and I don’t remember it.

I was at Rutgers from ‘55 to '59, we would walk down Somerset St. to donate blood at the hospital, and there was a Hungarian restaurant down there we would go to on weekends occasionally. I don’t remember seeing an 'art’ theater or seeing one mentioned in the local newspaper.

I remember seeing a version of “Alice in Wonderland” there when I was a kid, probably in the early 50’s (I think it must have been the 1949 version, judging by the description at IMDB).

While earlier directories give the address of the Europa as 196 Somerset, Polkâ€™s New Brunswick (Middlesex County, N.J.) City Directory 1946 has the following listing: Europa Theatre Scott nr Somerset. That is, on Scott Street near Somerset Street. Somerset Street is a major street in New Brunswick. Scott Street was a side street perpendicular to Somerset. Judging by current maps, I think that Scott Street has virtually disappeared due to hospital expansion. I remember the entrance to the theater being on the side street; thatâ€™s the way it was in the early 50â€™s; I donâ€™t know if it was always that way.

the Europa Theater then became the White Eagle Tavern/Restaurant on the corner of Scott and Somerset streets. I worked at the hospital in the mid 1970s and by then it was the Eagle, my mother lived on that block in the 50s and it was the Europa then.