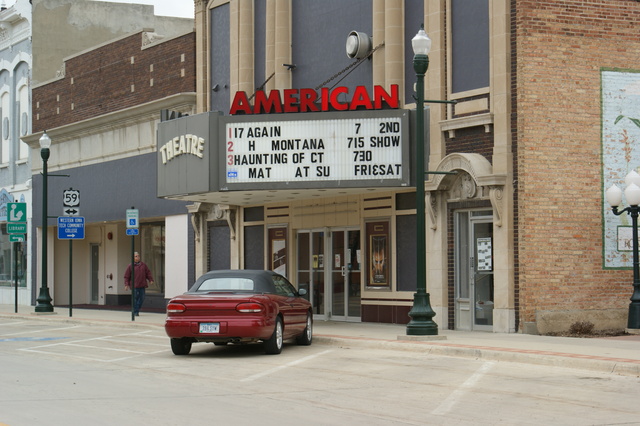 The Happy Hour Theatre was listed in the 1914-1915 edition of American Motion Picture Directory at 338 Main Street. It was renamed American Theatre during World War I. It was rebuilt in 1920 but contruction was delayed and it reopened on August 19, 1925.

i managed this theatre for awhile in the mid 70’s…It has a balcony with rental space on the second floor under the balcony…It was a brick building about the equivalant of three stories high….The theatre office was in the basement…it used to have a barber shop on one side of the building and a lingerie shop on the other as viewed from the street….It always was a busy place…There once was another theatre in Cherokee, Iowa called the Arrow but that has long been gone.

The American was purchased by Dale Goldie in 1929, and was decorated as part of a WPA project in the early 1930’s. On the walls either side of the stage are two large murals (three stories tall) of and Indian Chief and maiden tending corn. These were later covered by curtains, and may still be in the building. Dale’s wife, Hazle, sold tickets in the main lobby most of her adult life. Dale was a one time fire chief and mayor of Cherokee was as notable for his hats, cigars, and the 1939 Packard he parked in front of the theater every night. After Dales death, the theater was managed by a Roland K. Stonebrook and was operated by the Arrow Theater Corporation. They also operated the Arrow Drive-In one mile north of Cherokee on Highway 59. The sub-basement of the theater was used to house civil defense supplies. Amoung other notable items in the basement were 7 foot cut-outs of Rin Tin Tin and King Kong used in the 30’s and 40’s to advertise their respective films. The American was one of the first major buildings in Cherokee to be “cooled” with a large water and fan system. Both the American and the Arrow Drive-in were great places to work as a kid in the early 60’s

Movie goers of the early years will remember that no concessions were sold in the theater. Mr. Goldie did not want the theater dirtied…so… everyone would go next to the theatr to a small popcorn stand to get their food and then try and sneak it in. By the way, all small children attending films, alone, were confined to the first three rows of the theater…causing great neck pains.

The Arrow Theater mentioned above was built on the sight of the old Cherokee Opera House. A third theater,one block west of the American, was called the Orpheum and closed in the 40’s. It was also used as a lecture hall.

The theater one block West of the American was called the “Empress Theater” not the “Orpheum”. It was located next to the Hawley Allison Building and later became part of the Central Trust and Savings Bank. The Drive-In North of town was the “Corral Drive-In”, not the “Arrow Drive In”.

The “American Theater” was built in 1920 by two men from Cherokee: Barry Sisk and Walter James. They could not afford to finish it so it sat empty until 1923 when Dale Goldie bought it at a Sheriff’s sale.

Further info on the “Arrow Theater”: The “Opera House” as it was originally know, was bult in 1890, After WWI it became the “Rialto Theater”, and was later called the “Grand Theater”. It burned in 1938 and only the walls were left. These walls became part of the new “Arrow Theater”.

Sorry about the errors, but I was going on memory and not my notes. At my age I should know better… sorry again.

Does anyone have any more info on this theater? My group and I (MidIowa Paranormal) are going to re-investigate this theater and try to revalidate any happenings. Our last investigation we had caught a females voice and did not understand who the voice was and reading this article make us believe that it was Mr. Goldies wife. We will be visiting this theater again on May.2nd. So if anyone has more information on this theater please contact me at thank you

Opened as the Happy Hour Theatre and changed to the more patriotic American Theatre during World War I by Walter James and Barry Sisk.