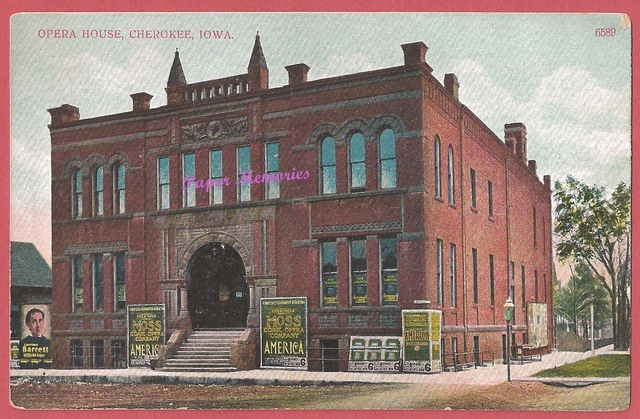 Located at the corners or Maple Street and Second Street in Cherokee, Iowa, the Arrow Theater was built on the site of the Cherokee Opera House. The Opera House after WW I had been renamed the Rialto Theater and later the Grand Theater. In 1939 it burned.

The exterior walls were reinforced and became part of the new Arrow Theater when it was built in 1940 to the plans od architect Robert O. Boller of architectural firm Boller Brothers.. The large theater had an exterior that was white cement with soaring Art Deco style columns in the front. Very modern for the time.

It and the American Theater finally became the only two remaining theaters in town when their rival the Empress Theater closed down in the 1940’s. The only other part-time theater in the area was the Coral Drive-In located 1 mile north of Cherokee on Highway 59. This drive-in closed in the 1970’s leaving the American Theater as Cherokee’s only theater.

The Arrow Theater was a children-friendly theater and was the sight of many a Saturday morning programs where area youngster could go see their favorite serials for a few milk bottle caps and maybe a dime or a quarter later.

The main floor consisted of an entrance and ticket booth, all in tile. After walking through double doors you entered a carpeted lobby with a concession stand…something not seen in the competitor American Theater until the 1960’s. The woman’s restroom was located off the lobby as were the three entrances to the theater proper. There was a large stairway that led to a partial second floor where the men’s restroom, theater offices and projection room were located.

The theater closed in 1962 was demolished in 1965 and replaced by the Steel State Bank.

Robert O. Boller was the architect for the Arrow Theatre.