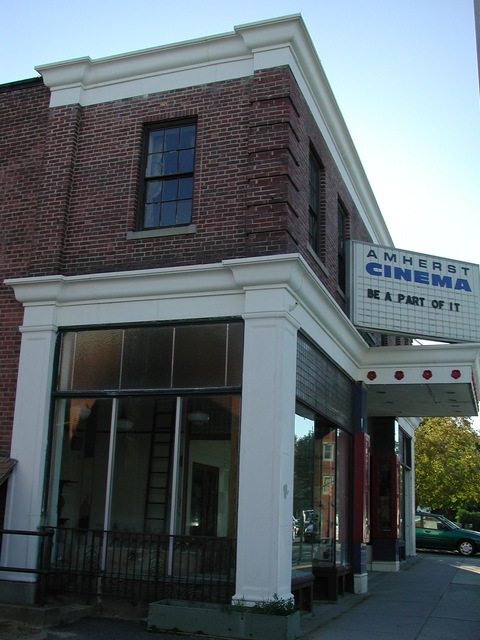 Built in 1926, the Amherst Cinema had 871 seats, and was created out of an old stable in downtown Amherst, Massachusetts.

For seven decades, the Amherst Cinema delighted audiences with first and then later second-run fare. Competition from the AMC Mountain Farms 4 and the now demolished AMC Hampshire 6 made life difficult over the years. By 2000, Amherst Cinema, along with the nearby Rivoli, closed its doors. Ironically, the theater outlived nearby Hampshire Mall 6, which was demolished months earlier.

The project was stopped and started numerous times.

When the theater closed in 2001, the town of Amherst, which is home to Amherst College and the University of Massachusetts, lost its only movie house.

In November 2006, the renovated theater was reopened as the three-screen Amherst Cinema Arts Center, featuring both mainstream and independent film. The triplex is a new addition to the building, as the original auditorium was gutted during the renovation to turn into retail shops. In 2012, a fourth screen named the Studio was added which has seating for 25.

I was a concessionaire at Amherst Cinema in the late 70’s. I made and sold the popcorn. Also the candy and soda. We would run weeklong reviews of old film legends. The Reagan week was playing while the guv was visiting his son at Amherst.
There was indeed a near riot when we went from hard core to soft core porn. Lots of requests for extra butter on the popcorn back then.
If the evening was slow, I would trade a big bag of popcorn for a Whole Wheat Pizza, delivered. We both got a good deal.
I miss the old cinema. The Drake, too. Nothing but a bunch of yuppies now. And The Drake is now The Perry.

In response to Joe Vogel’s question, the backmost part of the original theater (the front part of the auditorium, proscenium and stage area) was widened to the left and right bu quite a bit. Into that area they built the new cinemas. The remainder of the Amherst Cinema was gutted and converted into stores & restaurants.

The new Amherst Cinema is great. They show decent movies, the staff is polite, and the space is clean. I like that the theater is in downtown Amherst, not out in the malls. The hand dryers work really well.

The Theatre Historical Society archive has the MGM Theatre Report for the Amherst Theatre. There is an exterior photo taken in May 1941 on Main St. The theater was in Good condition, and had been showing MGM product for over 10 years. There were 844 orchestra seats and 300 balcony seats, total: 1,144 seats.

Some details about the current physical plant: Theater 1 is the largest and has a stage (I’ll check the capacity when next I’m in it), theaters 2 and 3 have 45 seats (plus room for one more or a wheelchair), and the Studio Theater (which is in a storefront about halfway to Amity Street) holds about 25 seats, and features its own bathroom off the back of the theater itself. Theaters 1 through 3 feature stadium seating, while the Studio Theater seating is on a flat floor with the screen well above the audience’s heads.

I was in Screen 1 tonight, and it has 171 seats, plus several more movable seats/spaces for wheel chairs. This puts the current total at 286 seats—the 871 seat total must be from before the renovation. (I attended one or two movies there in the 1990s—prior to the furnace breakdown—and the balcony Ron Slaters mentions was nowhere to be found.)

In the early ‘80’s I was District Manager for Western Mass Theatres, and this was one of mine. (I was manager at the Calvin in Northampton at the time.) I redesigned the newspaper ads to look like a ransom note, because the theatre was so edgy. Still, it was a great place and I have many fond memories…

For some time, a second cinema operated in Amherst – the auditorium in Town Hall was known as the Town Hall Cinema and operated as a cinema through 1949. A large room with fairly simple décor and an arched proscenium – seated probably 600. The auditorium was mostly gutted when it was converted into additional offices back in the mid 1950s. The beamed ceiling remained above the shell created for the offices and during a more recent renovation (I believe in the late 1990s) a third floor was put in and I believe at least some of the ceiling were incorporated into that plan. The Jones Library across the street from the Amherst Cinema also had an auditorium approx. 250 seats which I was told showed movies from time to time. In the 1960s, the stagehouse was converted into stacks, and a floor divided the auditorium horizontally creating two new rooms. A more recent renovation removed that division, restoring the original auditorium space; the barrel-arch ceiling is still there but considerably modernized.

Yes, Spectrum is correct- the Town Hall auditorium was used as a commercial cinema and is listed in some of the old Film Daily yearbooks.