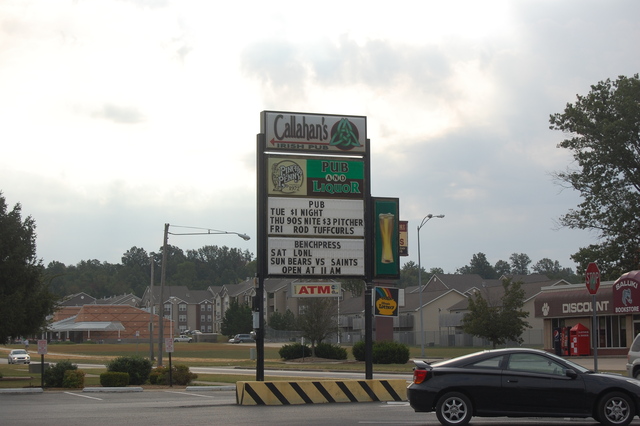 Located in the Lewis Park Village Mall. The Saluki Cinema was opened as a single screen theatre on November 24, 1970. It was operated by Kerasotes and they later twinned the theatre. Kerasotes closed the Saluki Twin on January 25, 1995.

The former Saluki Twin on East Grand Avenue at Lewis Lane has been home to the Copper Dragon pub (which features live entertainment) since 1995.

I don’t remember the Saluki Twin much, but I do remember the Pinch Penny. Great place, I hope they are doing well. SIU ALUM

Thanks Chris for a nice looking picture on a forgotten twin.

Great photos, only problem is that is the old IGA store. That is def not the twin theater

After looking at older photos I had my doubts about the building. I believe the remaining picture would be what would have been the marquee but if that’s wrong I’ll remove it as well.

the theater was open at least as late as 1994, as i saw tim burton’s “ed wood” there. by that time, it was a discount theater, playing movies that had already been in release for several months, so the end couldn’t have been much later than that.

Kerasotes Theatres is closing two local establishments within the next two months. The Saluki Twin Cinema will have its last showing Thursday, Jan. 25, and the doors of the Varsity Movie Store will close the first week of March.

The Saluki, located in the Lewis Park Village Mall, is closing due to lack of business. John Miller, general manager of Kerasotes Theatres, said, Attendance at the Saluki has dropped off and (the theater) has not been making any money. We have tried promotions to generate business but it never worked.

Charles Reiter, manager of the AMC University Place 8 theater, said, Since they (Saluki) are a dollar house and we are a full house, there will be no impact on our business. Reiter also attributes the closing of the Saluki with its bad location and lack of parking.

Varsity Movie Store, which is located at 418 S. Illinois Ave. and has been open for almost nine years, will close in March, Miller said.

Bryon Kluesner, manager of Varsity, said, Kerasotes is a movie chain with 97 theaters with three

video stores; they are just not interested in running the video stores anymore.

Miller said there are no definite plans for the two buildings, but there may be an expansion of the Varsity Movie Theatre.

Varsity will sell its selection of videos the week after they close. The Saluki’s last showing will be The Lion King at 9:15 and Frankenstein at 9:45 Thursday night.