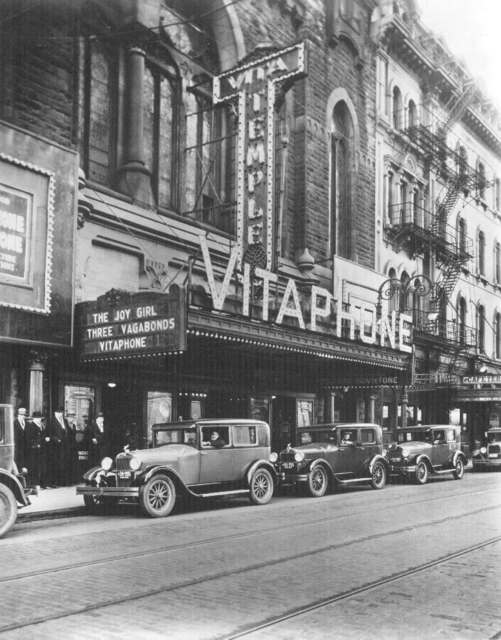 The Temple Theatre opened in a conversion of a former church which was built in 1844. It was opened on May 9, 1914 with Jack London’s “Sea Wolf”. The large house had 2,100 seats. Fashioned as a huge temple. When Vitaphone was introduced in 1927 they had huge letters on the front of the marquee announcing Vitaphone.

The Vita Temple Theatre had a short life as a horrendous fire destroyed the theatre on February 10, 1933. The temperatures were sub zero turning any water used to fight the fire into ice. The Vita Theatre was totally destroyed.

The theatre building was a former church converted to a movie palace. The exterior was gothic revival style, and I would assume the interior was as well. Sad that it operated for only four years before the fire.

Toledo Parking Violations is listed at this address on the Google map.

Built as the First Congregation Church in 1844, Toledo exhibitor W.C. Bettis – who built such early Toledo photoplay theaters as Colonial Theatre and the Alhambra Theatre – declared the era of the nickelodeon over. “[Nickelodeons] will give way to the large, commodius, ventilated and handsomely theatres equipped expressly for exhibition purposes.”

Bettis put his money where his mouth was converting the church into the “temple of motion pictures” with patrons getting around three hours of original film content for their admission ticket. It launched as the Temple Theatre, a silent house on May 9, 1914 with Jack London’s “Sea Wolf.” It was next door to the long-running and famous Boody Hotel and across the street from the County Building once housing one of the city’s main post offices.

OnFebruary 25, 1927, the silent house turned to Vitaphone sound system and renamed the “Vita Temple” Theatre. The theatre’s experience with Vitaphone was substandard and the theatre switched to Movietone in September of 1927. After the demise of the Boody, the building of the Second National Bank Tower upgraded the neighborhood while launching a banking building trend in the city.

But on February 10, 1933, a spate of 30 fires around Toledo broke out but none more spectacular than the destruction of the Vita Temple Theatre in the early hours. The final showings were on February 9, 1933 and the fire occurred while the theater was closed. BTW: The building’s “short life” mentioned in the paragraph above was a mere 89 years of operation with its final nearly twenty years as a motion picture theatre. Not a bad run.