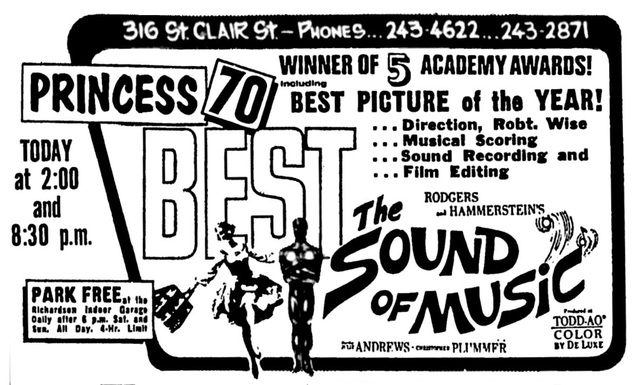 Here is still more information about the Princess Theatre from Mitch Woodbury’s column in the Toledo Blade of July 17, 1949. It presents information gathered by Martin Smith, a theater operator himself, who provides a somewhat different history than did the 1948 article I cited in the previous comment.

Smith said that in 1906 the Princess Theatre was a 300-seat moving picture house located on Summit Street, and was owned by Orra Brailey (the article uses the spelling Ora, but his 1966 obituary uses Orra, and is more likely to be right) who also owned the Columbia Theatre, a vaudeville house on St. Clair Street. When Brailey lost the lease on the Summit Street building in 1912, he moved the name Princess to the former Columbia (this house.) So the Princess mentioned in the 1911 MPW item was the one on Summit Street.

The column doesn’t mention the new Columbia Theatre that Mr. Brailey was reported by MPW to have been planning in 1911, so my guess would be that it never got built. Neither have I discovered the opening year of the Columbia that became the Princess in 1912. The column does say that, as the Princess, this house initially charged a top price of 25 cents for a ninety minute show, and raised the price to 35 cents in 1915 when a seven-piece orchestra was added to the theater’s attractions.

Thanks for the great info, Joe! I just got through looking at the 1913 Toledo City Directory and added like 40 theatres from that era to the listings at CinemaTour. Using Google streetview it surprises me that quite a few old theatre from over 100 years ago still exist!

I’ve been trying to put together a list of the theaters that once operated on Summit Street in downtown Toledo. There are more than a dozen names, but some of them are undoubtedly aka’s. There aren’t any details for most of them, but there are a few I’ve found addresses and seating capacities for. All but the Gayety appear to have closed by the early 1930s, and all have since been demolished, but Summit Street was a thriving theater district for a few years during the silent era.

Here are the ones I have listed on Summit. Oddly enough, I have not found one called the Gayety there, but you say there was.

Thanks for the list with addresses. I had all the names, but not all the numbers, and I didn’t know that the Regent was the same theater as the Crown.

A notice that Sidney E. Aftel and Edward Thal had formed a partnership was published in the March 6, 1913, issue of The Iron Trade Review. The pair had worked together at least once previously, though. The July 31, 1912, issue of The American Architect noted that they had designed a three-story Toledo building to be erected for The Jewish Educational League. Aftel and Thal had separate offices at that time. I can’t find any other pre-1913 collaborations. It’s likely that the Columbia Theatre was designed solely by Aftel.

Jack Armstrong operated the Esquire Theater across the street from the Princess also. Rose Larose (Burlesque) took over the Esquire sometime around 1967 or 68.

Jack Armstrong Owner of Armstrong Circuit, sold candy and concession supplies to Rose. My fellow employee and myself would deliver the supplies to her operation and Rose would offer to let us go in and observe a live show free, which we only took her up on once.

Armstrong operated Jesse James Drive In, Starlite Drive in, Telegraph, East Side and Parkside (Now Sundance Kid) Drive Ins. Also, Maumee indoor, Valentine and others. I personally managed the Parkside and twined it adding the second screen. The late Ed Searles actual owner of Starlite and Parkside, was a good friend. Dan Searles, brother of Ed owned the Telegraph Drive In. When Mr Searles closed Starlite to build Starlite Plaza, he transferred the Marquee over to the Parkside and had it rewired and fit with the letters Parkside. It had a star burst at the top of the Marquee and like many marquees of the day, it was a magnificent piece of work.

Later on I became company supervisor of Armstrong Circuit and when the owner Carolyn Hatch,(daughter of the late Jack Armstrong) closed the company she offered me the Portage Drive in Theater in Bowling Green, Ohio for $39,000 since Portage had been both her and My Alma Matter. But owning a restaurant at the time I was strapped for cash and had to turn down the offer, a decision I could kick myself a thousand times for making.

A list of theaters operated by Balaban & Katz as of October 1, 1949 included the Princess in Toledo. This has me wondering if the September 29, 1948 item in The Exhibtor that says “[p]lans for the modernistic B and K house in Toledo, 0., were completed by Holabird and Root, architects….” was about the Princess. The only other Publix house we have listed in Toledo was the Paramount, and I can’t find anything about a remodeling of that theater in 1948, while there are multiple references to the Princess being remodeled that year.

This house apparently did operate as the Columbia Theatre for a while before being renamed Princess. It was listed as the Columbia in the 1914-1915 American Motion Picture Directory. The name was probably changed not long after the Directory went to press, though, as the original Princess on Summit Street had already closed. The “modernistic” 1948 remodel must have been mostly on the inside, as in later photos the basic form and many details of the exterior were still recognizable from original architect Sidney E. Aftel’s 1913 photo of the Columbia.