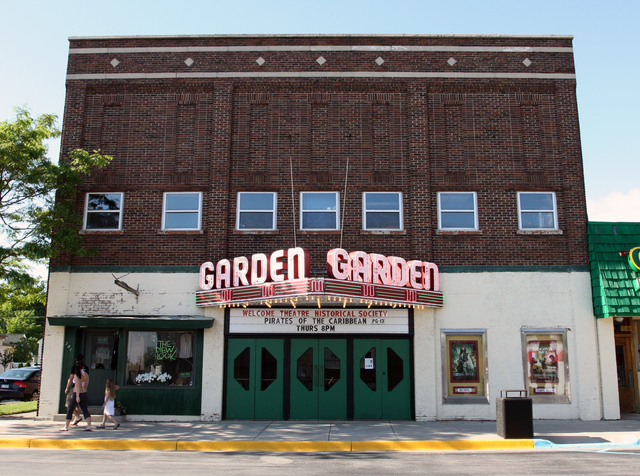 The Victoria Theater opened in August 1924 with 592 seats. It has been in almost continuous use ever since and was renamed Garden Theater, prior to 1941.

Since around 1980, the building fell into great disrepair, including a failed steam boiler heating system, allowing for only summer operation. In June 2008, the Garden Theater was purchased by a group of community members with intent of renovating the building and giving life back to this Northern Michigan treasure.

After a few ‘bandages’ were applied during the summer months, the Garden Theater closed for extensive renovations in October 2008. Throughout the winter and spring, an incredible transformation took place and on June 18, 2009, the Garden Theater re-opened with great fanfare.

A new state-of-art heating and cooling system was added. The sound was upgraded to Dolby 5 channel digital. Brand new seats from Irwin Seating in Grand Rapids were installed and the entire assembly area was restored to its original Art Deco style brilliance. The renaissance of the Garden Theater is underway thanks to hundreds of volunteer hours, seat investors, and the incredible spirit of the local community! An army of volunteer painters took on the incredible task of replicating the many damaged Art Deco style ceiling tiles. Special thanks to John Vinkemulder, Peggy Hawley, Mary Armstrong, and Lynn Petti for their leadership of the project.

The Garden Theater will continue to show first run movies, expanding to independent films, foreign cinema and an Annual Film Festival. Live theater and music are also part of the future one improvements are made to the existing stage.

I think it may shut down in the winter off-season, but will inquire.

The Garden Theatre is still open (it closes for the winter season) and happens to be for sale.

An interesting item form the October 7, 1974, issue of Boxoffice:

“Mr. and Mrs. Neil Haugen are interested in obtaining any information, pictures, or material anyone might have on the Garden Theatre, Frankfort. The house opened in 1923 as the Victoria Theatre. The Haugens wish to compile a history of the theatre and desire more background material than they presently have.”

The Garden Theatre’s web site has a history pagewhich also gives 1923 as the opening date, but doesn’t mention the aka. In fact, most of the history on the history page dates from 2008.

The earliest mention of the Garden I’ve found in Boxoffice is in the June 10, 1939, issue which said the Mrs. Custer C. Carland was remodeling the house. A September 14, 1940, item said that the Garden had been acquired by the Ashmun Theatres circuit.

The Garden got another remodeling in 1947, reported in the May 17 issue of Boxoffice. There were to be 700 new seats, a new marquee, a porcelain sign, new flooring and carpeting, new concessions stand, redecorating, and some structural alterations including moving the box office.

The Garden Theater, at 301 Main Street in Frankfort, opened in August 1924. My Uncle Albert S. Johnson Jr.’s theater job list shows this as a 1947 remodeling project by his father Al’s Johnson Construction Company.

The “art moderne” style of the Garden Theater is consistent with a 1947 remodel. Current images of the theater, which remains in use, show three pairs of green doors with matched half-octagonal glass panes. These are the same patented “Johnson doors” used in several of Al Johnson’s other theater projects of the era.

Unfortunately, my grandfather Al Johnson Sr. left behind no Kodachrome slides of this theater project for us to enjoy today.

My first visit to this site and the Garden Theatre entry in a long while. Absolutely fabulous what’s been done to the place! Many many Thanks and keep up the good work.