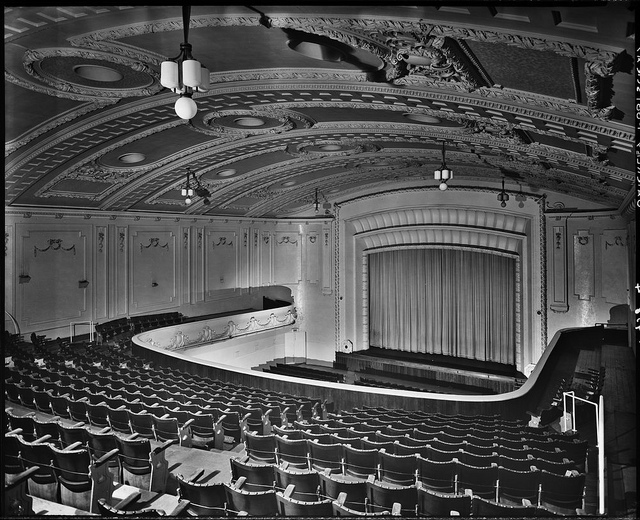 The Barkly Theatre opened on 17th October 1914 with pictures and vaudeville on the programme. The architectural firm of William A.M. Blackett & Forster designed a splendid Edwardian Baroque style building which was richly decorated.

Originally the exterior of the building had a tower located at each end on top of the facade which had the name of the theatre mounted on top. Today only the stumps of the towers remain.

The foyer area was rather small considering the size and capacity of the theatre. Inside the auditorium, seating was arranged in stalls and balcony levels. The gently curved ceiling was decorated in panels which had beautiful plaster mouldings.

It originally opened as an independently operated cinema, but was taken over by Hoyts Theatres chain in 1926 and they continued to operate it through the rest of its cinematic life. Hoyts closed the Barkly Theatre on 20th January 1962. The floor in the stalls was re-aligned by leveling at the stage end and stepping towards the rear. Seating was retained in the balcony and it re-opened as the Fiesta Cabaret & Reception Room which continued until 1977.

From 1977 it operated as the Fiesta Bingo Club and this lasted until it was closed in 1989. The building was shuttered awating a new use when it was severely damaged by a storm in 1991. The fly tower and practically the entire stage house collapsed, which left the building wide open to vandals, who wrecked the auditorium and foyer areas.

Fifteen years later, the wrecked building was still standing, a meeting place to gangs and drug dealers. In 2001 plans were put forward to build thirty two-bed apartments at the destroyed stage end of the building and and restore the theatre for live performances. This scheme came to nothing and plans were revised to turn the whole site into a seven storey apartment block.

In the interime period, again nothing happened and the building stood awaiting its fate. By early-2009, the building had been converted into apartments, with a new apartment tower built on the site of the former stage-house. The foyer and facade of the building have been restored to their original splendour. It is Heritage Listed on the State of Victoria Register, but the listing only applies to the facade and balcony foyer.

Here are a set of 23 photographs I took of the Barkly Theatre in February 2006:
View link

A photograph I took in February 2010, as the finishing touches were being made to the apartment conversion:
http://www.flickr.com/photos/kencta/4798717333/