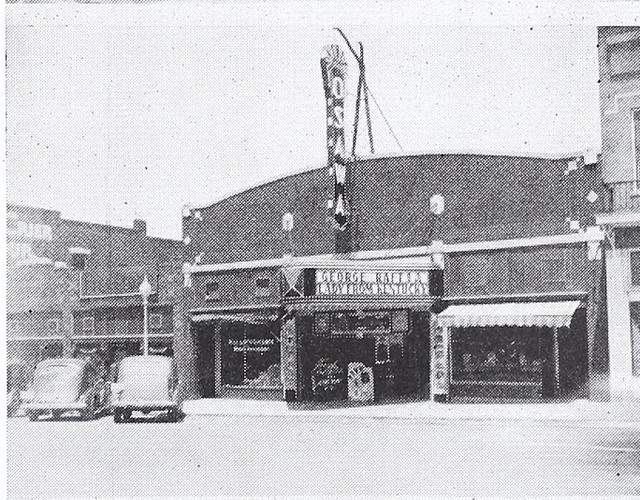 The Dickinson Theatre was opened prior to 1932. It was remodelled in 1939 to the plans of architectural firm Corgan & Moore and renamed Osawa Theatre. It was still open in 1957.

Here is a 1942 photo from Life Magazine:
http://tinyurl.com/6pjwky

You can access more photos if you narrow down the categories. For instance, “1940s main street” gets you a couple dozen photos that you wouldn’t get by searching for “main street” by itself.

OSAWATOMIE, KAS.-R.V. Johnson, discharged recently from the army after five years in the service, has been appointed assistant manager of the Osawa Theater by the H.J. Griffith Circuit.

Neither of the old buildings still standing on this block could have been the Osawa Theatre. It was probably where the modern Landmark National Bank building is now located. The theater has undoubtedly been demolished.

In 1939 Dickinson Theatres embarked on a $250,000 project of remodeling and renovating many of the theaters in the circuit. An article about the program appeared in the August 19, 1939, issue of Boxoffice. All the projects were designed by the Dallas architectural firm of Corgan and Moore.

One of the houses that the article listed as part of the project was the Osawa. The theater had been renamed, but the article didn’t say what the previous name had been.

Prior to 1939, when it was remodeled by Corgan & Moore and renamed, the Osawa Theatre was called the Dickinson Theatre. What I have not been able to determine is whether the Dickinson, which is mentioned in The Film Daily as early as 1932, was the house originally opened in 1921 as the New Empress Theatre, which had vanished from the listings by the time the Dickinson appeared. If the Dickinson was the former Empress then it was expanded at some point, as the Empress had only 295 seats and the Dickinson was listed with 566.

The February 23, 1955, issue of The Film Bulletin said that the world premier of the movie Seven Angry Men would take place in Osawatomie, but didn’t give the name of the theater. It was most likely the Osawa, though, as the Kansan, if it was even still open at that time, was considerably smaller.