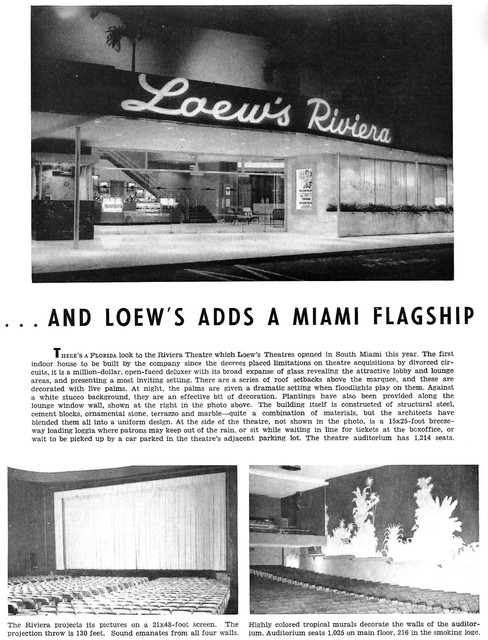 Opened on February 16, 1956, the Loew’s Riviera Theatre was one of the first shopping center suburban theatres in the country and the first new build allowed Loew’s after it’s divorce from MGM and the Paramount Consent Decrees. The Loew’s Riviera Theatre was well supported by it’s proximity to the University of Miami and the main traffic artery of US 1. The journey from downtown would have taken minutes in the 1950’s. The opening feature, “Picnic” with William Holden, was dated with Radio City Music Hall. Seating in the single screen theatre was provided for 1,281, with 1,015 in the orchestra level and 216 seats in the loge (which was a smoking area). There were large murals of tropical plants along the auditorium side-walls.

I never went in when it became a five-plex, but the GCC twinning on October 9, 1974 could only be described as criminal. It was closed on January 29, 1999 with Michael Keaton in “Jack Frost”.

On a recent visit to Miami I saw an advertisement for the furniture showroom which took over the building, saying they would show a movie while you tried out the furniture. Might the projectors still be there? It was taken over by the Area Stage Company in 2008 who used one auditorium with a total seating capacity for 300. In 2016 the other space was a dance studio. It was closed in March 2020 and demolished in May 2021.

I have created a Cinema Treasures page for the first theatre in the area to be named Riviera, which was briefly open in the mid-1920’s just south of this Riviera, before becoming part of the Holsum bakery. 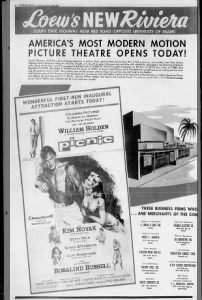 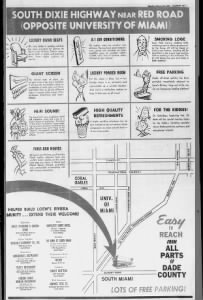 My final film here, was “Poltergeist III” in 1988. I wonder where the fifth theater was…

The balcony was split into two theaters, like the main auditorium. Awful.

The Riviera Theatre is closed.

Of the businesses in the Riviera Plaza shopping center, the theater was the centerpiece and the last to go.

In early February 2020, a few weeks before the coronavirus pandemic shutdown, I noticed that all of the Plaza’s storefronts other than the theater were permanently closed, with some posting signs saying they had relocated elsewhere. The Area Stage Company that was using the Riviera Theatre remained, probably until the shutdown, and is moving a block south to a space inside the Sunset Place shopping mall on the second floor near Barnes & Nobles.

When I walked by on July 27, 2020 the stores were still vacant. Curious, I Googled “Riviera Plaza”… and discovered that Gadinsky Real Estate, LLC has plans to turn it into a “70,000 sq. ft. multi-level Publix-anchored shopping center”, that would apparently require the original Plaza to be removed…

I believe that in the immediate area the only businesses that date back to when the Riviera Theatre was a cinema are Swensen’s restaurant and Publix supermarket (before it moves to the new Riviera Plaza).

I remember the Plaza once included Riviera Photo (I think it was called), a photography shop where University of Miami film students had their Super 8mm film cartridges processed for their introduction to film production classes. The store had been there for decades, then closed sometime in the 90’s due perhaps to the rise of digital cameras, and by that time the nice older couple who owned it may have wished to retire.

If the Riviera Plaza is torn down I may miss it, even though it hasn’t been a regular part of my life in many years.

That area was my neighborhood, while I was a film student at UM in the early 80s. We turned in our film to the “Stock Room” in the “Film Shack” on campus, then a person took it over there for us. I never set foot in Riviera Photo myself.

I did go to several films at the theater while in college, but never as a child, when I first lived in Miami from 67 until 73.

The Riviera Theatre, as well as the entire Riviera Plaza shopping center of which it was a part, was demolished in the days leading up to May 25th, 2021, when I gazed down from the northbound Metrorail car I was riding on and saw machinery removing the last piles of debris.

Only the marquee still stands alone at the sidewalk on US-1. (I walked by today and confirmed this. I hope the developers leave it there or incorporate it into the new Publix project as I’ve always enjoyed how it sort of had its own identity physically separate from the building.)

Wow, thanks for posting this. I’ll never forget watching “2001: A Space Odyssey” at my San Remo Apartment (now demolished), and rushing to this nearby theater to watch “2010: The Year We Make Contact” in 1984 - with minutes to spare. was a UM student, and went there often.