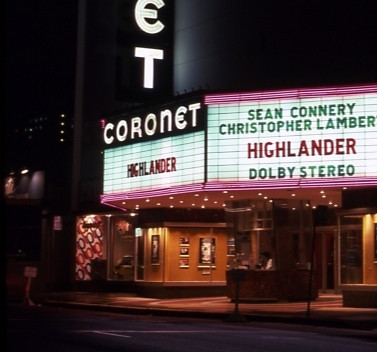 Opened on November 2, 1949 with Cary Grant in “I Was a Male War Bride”. This Streamline Moderne ‘cavern’ with 1,350 seats on a stadium plan, became San Francisco’s Church of the Big-Budget Blockbuster. Both “Star Wars: Special Edition” and “Phantom Menace” made their debuts here, with people camping for weeks in the dumpster-strewn parking lot.

Despite its massive appeal, gigantic screen, and state-of-the-art sound system, the Coronet Theatre was closed in March 2005 and was razed in the summer of 2007 for a senior-care facility.

I walked by the Coronet Theatre one Fall day in 1966 and saw a Help Wanted sign on the Box office window, remembering the time years earlier when my brother and I saw Ben Hur, I decided to apply for a Job. I was hired and started working that very night as an usher . I stayed for 10 years .many memories of the people I worked with, the movies that premiered and the crowd of theatre goers from “Hawaii ” in ‘66 to “ Star Wars in '77

For the Star Wars reissue in 1996 – this was the one time I slept overnight in line for a movie. My girlfriend, later wife Terri, got in line in the early afternoon and I came over to take over after eating dinner at Mel’s Drive In (the tie in to George Lucas was great!). After midnight it quieted down nicely except for some nut case dressed as Chewbacca who was running around half of the night. By morning the line was past the 76 station and curling around the block. We were in the line for tickets for the first night show. The day show line went the other direction – and I think eventually the two lines met on Anza street to the south. It was all worth it. Now with advance ticketing this sort of craziness is history.

Happy 50th! “My Fair Lady” opened at the Coronet on this day in 1964 (and went on to become one of the theater’s longest-running engagements).

I grew up on Parker Avenue, just around the corner from the Coronet – so, of course, it was our favorite theater in town. If my sister and I were good, my mom would pay for loge seating, and we felt like royalty! (Sometimes, my mom would just buy herself a loge seat, and leave us to our own noisy devices in the cheap seats)

I remember our dog escaping from the house one day, and we were crazed, running around the neighborhood looking for him. About two hours later, we got a call from the manager of the Coronet, asking us if we had a little schnauzer named Spockie (named after Mr. Spock – it was the 60s). We went to collect him, but he really wanted to stay, since they were feeding him hot dogs. The smell probably brought him there in the first place.

And, yes, I saw Star Wars there about a week after it opened, waiting in a huge line, even though I had already seen it twice down in the Palo Alto area (one of those geodesic dome theaters – forget the name). Because I had to see it in my childhood movie theater, or it wouldn’t have been the same.

A few years ago, I took my husband on a tour of ‘my’ San Francisco, and got confused, thinking I had somehow misplaced the Coronet. We stopped at Pier 1, and the employee there pointed to the hulking retirement facility a few doors down, saying ‘That’s where it was’. Gutted.

The Coronet was among just eleven theaters in the United States that installed the then-new Dolby Digital sound system for their engagement of “Batman Returns” which opened twenty-five years ago today. And here’s the link to a retrospective article that commemorates the occasion.

Steven Spielberg’s “Close Encounters of the Third Kind” opened here forty years ago today (thanks to a court order that brought an end to venue’s run of “Star Wars”). This venue was among only about three dozen nationwide to play the movie in a 70mm presentation and the run played for a hugely-successful 27 weeks. For more, please see my retrospective article celebrating the movie’s 40th anniversary.

I used to drive past this theater all of the time, not particularly interested about what went on inside since they never really screened the films I liked to watch. Today I regret not ever having patronized it and getting to experience one of the city’s better theaters before multi-plexes came along and annihilated the single screen business model.

AKA the cave AKA the crown AKA the informal home of all Lucasfilm and Paramount movies. All Star Wars and Indy Jonss films played here from A New Hope and Raiders to Attack of Clones. The Screen was massive slightly curved (think Northpoint & Cinema 150 not the Centurys) and the curtains were very impressive. Saw the original Top Gun'86 and Star Trek ‘79 here…Great times to be had by all! Excellent job The Cave! RIP mighty one! 😇😘