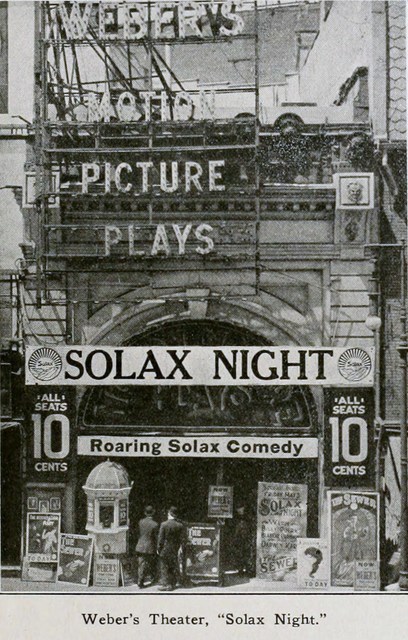 Thanks Bryan. There were several Wallack’s locations over the years but the one I am enquiring about was located near Weber’s or was the same location as I cannot find an overlap.

It suspect that the promoter may have renamed the theatre when they leased it and then it reverted back to its old name like many Manhattan nightclub venues still do today.

Yes, there were 3 or 4 theatres named Wallack’s in NY. And the Anco on W. 42nd St. was one of them. There was a Wallack’s on Broadway, on the east side, at the northeast corner of W. 30th St. This was a first-class legit house with both straight plays and musicals. It was located one block north of Weber’s Theatre, on the opposite side of Bway. There is a photo of it, plus some info, in Mary Henderson’s book “The City and the Theatre”. It was opened by Lester Wallack in 1882, was later operated as Palmer’s Theatre, before the original name was restored, and was razed in or after 1915. No mention if it was ever on movies.

Al Alvarez – I just looked at your photo link above, and this is the same building as the photo in Mary Henderson’s book.

You’re right, Ron! That the photo in the Henderson book sure looks like the same location as that link.

Wallack’s was certainly mostly live theatre but it did show non-mainstream films also, mainly hunting and travel films sometimes accompanied by a lecture, not unlike Weber’s.

I am not sure it deserves a listing here but I am glad Henderson’s excellent book covers it.

The Weber & Fields Music Hall in NY is listed in the 1897-98 edition of the Julius Cahn’s Official Theatrical Guide. The listing shows that Weber & Fields were the Managers; the seating capacity was 731, broken down as Orchestra: 407, Balcony: 124, Gallery: 200. Admission prices ranged from 25 cents to $1. The theater had both electric and gas illumination, and it was on the ground floor. The proscenium opening was 30 feet wide by 55 feet high. The stage was only 18 ½ feet deep. There were 14 places in the orchestra pit. With such a shallow stage and fairly low seating capacity, it’s surprising that it did not become a cinema earlier.

In the book Fifty Great American Silent Films 1912-1920, by Anthony Slide and Edward Wagenknecht, it states that the film Traffic in Souls, about white slave trade, opened here in 1914.

Photo added credit The Moving Picture News, May 4th, 1912. From the below Silent-ology link. Copy and paste to view.

According to an index card in this PDF from the Theatre Historical Society, the Imperial Music Hall opened in 1892 (on Monday, October 24, according to the October 26 issue of The New York Sun.) It became Weber & Field’s Music Hall in 1896, Weber & Ziegfeld’s Music Hall in 1905, and simply Weber’s Theatre in 1906. Alterations made in 1908 were by Thomas Lamb, and additional, though minor, alterations made in 1914 were designed by Emery Roth. The theater was demolished in 1917.

interesting note . this theater hosted the premiere in 1913 of A Traffic in Souls an early feature from Universal. for 1913 at least the film was considered as daring expose of the white slave trade.