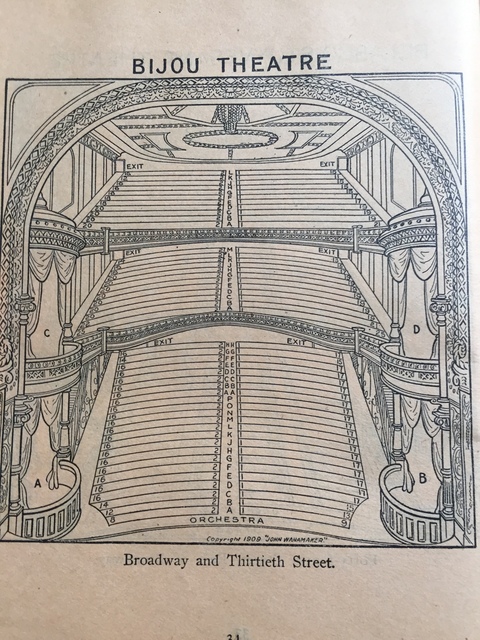 The April 2, 1913, issue of The American Architect said that Philadelphia architects Stuckert & Sloan had filed plans for alterations to a five-story moving picture theater on Broadway at 31st Street in New York City. The project was budgeted at $15,000 and the client was the Joseph Weschler estate.

According to an index card in this PDF from the Theatre Historical Society, the Theatre Brighton opened in 1873 in a building converted from a saloon. It was later renamed the St. James Theatre. The house was rebuilt in 1883 to plans by John McElfatrick, and opened on December 5 as the Bijou Opera House.

Alterations were made by architect Thomas Lamb in 1908, and additional alterations designed by architect W. G. Masarene in 1910. The building was demolished in 1914, and the card doesn’t mention any alterations by Stuckert & Sloane, so perhaps their 1913 project was for the only other theater on Broadway near 31st Street, Gane’s Manhattan.

The July 2, 1910 issue of Moving Picture World had a few words to say about the Bijou, recently converted to a movie house, and they were not entirely complementary:

“We have noticed for some weeks past that the popular little Bijou Theater on Broadway at Thirtieth street has been converted into a picture house, and we have waited for a convenient opportunity to pay the theater a visit and see for ourselves whether those who are responsible for putting on the pictures have grasped the opportunities which Broadway offers, and which nobody, not a single soul, between Twenty-third and Sixtieth streets, seems to realize; that is, of giving Broadway a real picture house. We mean a house in which the picture is made the predominant feature, plus good music and the like. The Bijou has not risen to its opportunity, although it is a comfy little house, we might say an almost ideal house, for the purpose of studying the picture leisurely and amidst agreeable surroundings.

“To begin with, it seems to be felt that at the Bijou there is no necessity for excluding superfluous and extraneous light from the screen. The result was that on the occasion of our visit one afternoon last week some excellent Gaumont. Pathe and Selig pictures were almost, nay, we might say absolutely, spoilt by too much light being thrown on the picture. Then again, a little to the right of the proscenium opening there was visible all through the piece the shadow of the revolving arm of the operator, who was working in the gallery. Also the operator seemed to us to work too fast. We feel that if these little defects are seen to in future and greater care be taken to show the picture at its best, the Bijou Theater still has a chance of becoming a first-class picture house. And in order further to increase that chance, it must cut out the stupid vaudeville which we saw. Also the very indifferent singing. The vaudeville end of matters was only redeemed from absolute failure by some very clever dancing on the part of a boy and a girl.”