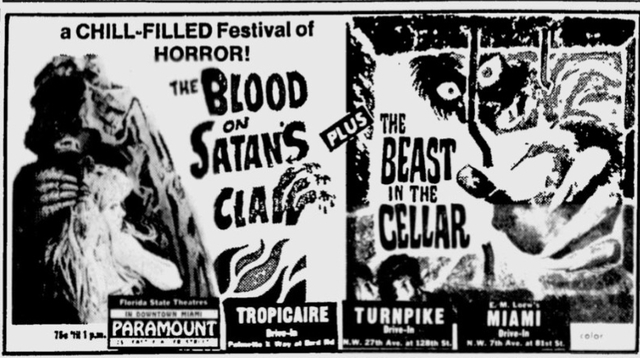 The Tropicaire Drive-In opened on February 15, 1949 with Eddie Cantor in “If You Knew Susie” & Leon Errol in “Bet Your life”. The rear of the screen tower was decorated with rare tropical plants and palms, and was backlit at night. It closed on December 27, 1987 with Richard Dreyfuss in “Stakeout”. Car capacity is given as 800.

The Tropicaire Shopping Center is now located where this former drive-in once stood.

The Coral Way Drive in was a very busy theatre. I have no idea when it closed, but the last movie I saw there was Smokey and The Bandit!!!

I listed the 27th Avenue Drive In, unique in the fact that it was the only air conditioned drive in.

The Tropicaire also held several fairs there before it became a flea market. The Around The World Fair was held there at one time. That fair was put on by the Museum of Science. This was quite a while ago, the song Time of The Season by the Zombies was the number one hit, so go figure on the actual year!

Several shots the Dixie Drive-in, Perrine/Goulds can be seen on this website.

The Tropicaire Drive In is one of my fondest childhood memories. I lived in Miami from the early fifties until 1960. My father worked for the City of Miami in the landscape dept. But, his second job was as a cook at the Drive In. Of course, this entitled my family to free admission so especially in the summer while school was out we saw many double features. We would always arrive early before dark and my brother and I would walk the parking aisles searching for change dropped by careless movie goers. Some evenings we did quite well. But about dark we would have to be sure to be in the car with the windows up as there would be a truck coming thru spraying/fogging for mosquitoes. I believe they used DDT at that time. I was first introduced to pizza at the theater. I can still smell and taste it till this day. I am sure it was just a premade boxed pizza but I have never tasted one better. Ah, the theater is gone, my dad is gone and my brother is gone but the memories will be with me forever.

Now you count lasts. Dade’s next-to-last drive – in , the Tropicaire at Bird Road and the Palmetto Expressway, will be closing down. It was called the South’s most modern drive – in when it opened in February 1949.

Gone will be the Americana of the Tropicaire ’s peeling green facade, pink and green neon and 10 palm trees poking out of planters behind the 40-foot screen. The palm fronds blow in the breeze as if summer nights are forever.

Thursday, the Metro Commission approved zoning changes that would allow developers to build a 287,000-square-foot shopping center on the 28-acre Tropicaire site, now used Thursday through Sunday nights for last-run, pre-video movies and on weekend days for a flea market. Its future is also dim.

“The flea market on Saturdays and Sundays was the only thing that really kept us going,” said Keith McComas, Tropicaire ’s owner. He is 69.

There were 27 paid parked in the lot Thursday at 8:38 p.m. when Three Amigos flickered on. Platoon was the second feature.

Some views on drive – ins from Tropicaire customers:

“It is just being out of doors in the evening when the sun goes down,” said Arthur Brill. He drove from Homestead with his wife, Judy, and seven kids sitting in the bed of a blue Ford pick up.

“We can take all the neighbor’s kids,” said Judy Brill.

“ Drive – ins are as American as apple pie,” said Jim Spittler of North Bay Village. “This one has the best corn dogs in Florida.”

“You can dress casual, relax, kick off your shoes and prop up your feet,” said Bill Freeland of South Carolina.

“It’s a shame,” said Terri Jaramillo of Homestead. “Now we will have to stay home and watch TV.”

Her bumper sticker read “Too Many Boys. Not Enough Men.”

“We will miss the place. There is enough shopping centers,” said Donna Stomick of Kendall.

Bill Ogden, president of Brancroft Development, said the group hopes to build a “Key West-style” shopping plaza of about 50 stores and more than 1,100 parking spaces on the spot. It will be called Tropicaire Center. This will happen in six months, said theater owner McComas.

Dade Mayor Steve Clark had his own views on the new shopping center: “It will be an upgrading of the property.”

Opened with “If you knew Susie” and “Bet your life”. There was a home in the screen tower(manager?).

I recently came across a broadcast of a sermon by local Pastor Steve Alessi. He says when he was young his church required that he avoid pop culture including movies, but describes having watched movies from outside the fence at the Tropicaire because he had figured not being on the inside is like not attending in compliance with his church’s rules. : ) He also mentions the Coral Way Drive-in.

Click here for a link to a video of his presentation set to begin at about the time the subject comes up.