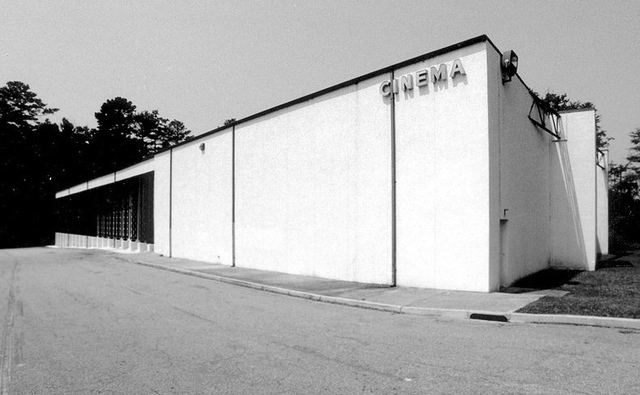 The Weis Cinema I & II was opened on December 25, 1970 with Ali McGraw in “Love Story” & Jack Nicholson in “Five Easy Pieces”. It was taken over by the Georgia Theatre Company sometime in the late-1970’s or early-1980’s and renamed Riverside Cinemas. It was later converted into a 4-screen theatre. The only chance I had to see the interior was after it was converted into a furniture store. The exterior of the Riverside Cinemas is almost identical to the General Cinema freestanding twin theatres built during the 1970’s.

Mike, I looked at the Drive-ins you added. Some I have heard of, others I have not. Unfortunately I came along too late in life to enjoy any of them, and the only thing I know about them is what I have heard second hand. Thanks for taking the time to document these theatres. Hopefully someday someone with personal memories of these places will come across their pages and post about them.

Wow Stan. Great comments. I have some answers for you, but where do I start?

If you entered RC4 and faced the concession stand straight ahead, the two auditoriums on the left (1 and 2) were the ones created by the split down the center. From the booth you could see where the dividing wall met the glass port window, which was a wide single pane originally accommodating two projectors in a changeover arrangement. Take a look at these two photos and notice where the wall meets the glass.

On the opposite side of the lobby was auditorium #3, and its wide port window was still as it originally appeared. In the booth you could see where the 2nd projector (for changeover) was originally mounted. In this picture taken from the screen end of the auditorium, you can see the wide port window.

So basically, from the booth, the projectors for auditoriums 1 and 2 were located in nearly the same position they would have been in the changeover arrangement before the wall was built to separate them. Auditorium 3 wasn’t divided, but the 2nd projector was removed and I assume is the one used for auditorium 4.

Auditorium #4 was the tiny add on next to #3, and it had an odd shape. It was wider at the screen end and very narrow at the back. If I remember correctly, there was one row at the right rear with only 2 seats. There was also a ladder behind the curtain in the back of that auditorium that led up to the booth through a secret hatch. Anyway, this was obviously a “make do” kind of arrangement.

Concerning the platter systems, I had certainly experienced both brain wraps and slinging prints (the latter usually occurred toward the end of the movie when the remaining film was lighter). We learned to avoid those problems most of the time though. We actually had some suction cup guides we could use to brace the print if needed.

All the projectors were apparently reel-to-reel early on. On occasion I even used the bottom spindle to take up the print on those 6,000 foot reels instead of using the platters. This was only done in special circumstances though.

As for the Macon Mall Quad, none of the theatre’s auditoriums were divided. That theatre was torn completely down, and a new theatre, the Macon Mall 8, was built in its place with all new equipment. I never worked at the Quad, so I am not familiar with the manager you mentioned.

Thanks for checking out the web site. It was fun documenting the place I worked for my first job on up into my early 20’s. Many who worked there had an affection for the place.

Thanks for that additional information Tim. I am really surprised that GTC added on a tiny theatre for #4 instead of just tearing off a chunk of the remaining large house. In 1978 they quaded the South DeKalb Twin and turned two beautiful 540 seat showcases into four 338 seat shoeboxes. They would not even consider leaving one side intact but since they even carved up their Lenox Square flagship there was nothing sacred to them in that respect. Riverside could count itself lucky that at least one house was still something to be proud of.

In the early Weis days the newspaper ads indicated which movie was playing in which theatre. #1 was named “The Popular Showplace” and #2 was labeled “The Intimate Theatre.” I could never notice any effort was made to play a particular type of movie in one side or the other. I also do not remember any difference in the two. I know one side was twinned when you started, but do you think that they were identical when built?

After 1974, Weis renamed this the “Weis Cinema Centre” and quit making any note as to which movie played in which side or even how many theatres were at the Centre. I like the “re” instead of “er” spelling. I am sure that made it a much nicer moviegoing experience. They did the same thing in multiscreen theatres in other cities except Atlanta where there was a single screen “Weis Cinema” already in business. There they took the Arrowhead Triple and named it the “Arrowhead Cinema Centre.” They did not do the same with the Cinema 75 Triple. I guess a name of “Cinema 75 Cinema Centre” was too much.

When you came to work there, did you come as a projectionist or did you move into that job? I ask because the very nice, orderly appearance of the booth suggests that there might have been some long time operator there who had taken care of the place for years. I can not begin to count the dumps I have walked into over the years and spent countless hours trying to organize the mess left by a succession of previous “projectionists.”

I did not realize that the old Macon Mall Quad had been dozed and a new theatre built. I thought that booth looked a lot bigger than I remembered.

Thanks again for the pictures and video. I have been passing them around to some of my former booth mates from years past.

Stan, I started as a doorman/usher at the age of 16 in 1992, and I was trained as a projectionist maybe a year or so later. I eventually became an assistant manager, but I didn’t particularly care for those duties. The booth was where I belonged, and I performed projectionist duties throughout my years there. The man who probably set up that booth in the beginning, Andy Nobles, was a longtime projectionist in Macon. At one time he ran one of the local drive-ins. I understand he was responsible for a lot of the “rigged” solutions that made the RC4 booth so unique. He had retired shortly before I was hired, but I did see him visit from time-to-time. I really don’t think he was the tidy type though. I’ve got some stories to support that, but I will save those for another post or e-mail. :)

Probably one of the reasons the booth looks orderly in my pictures is because I can’t stand being unable to find something when I need it. So, I worked at keeping things in their place. I also hated seeing pieces of cut film on the floor or trash lying around. It’s just a personality thing. Most of the people we had working up there did a good job of helping keep it that way too. Thanks for the compliment!

Although I was too young to remember RC4 in the days before it had four screens, I had heard that the fourth auditorium was an addition rather than a split. The evidence seemed to point to that as well. Here is a photo along with my thoughts:

In the above photo, the wall with the “Cinema” sign was the right wall of the #4 auditorium. Now look at the columns on the outside of the building that end approximately halfway up its length. If you were to look behind the curtains along the right side in #4, you would have seen the remaining columns, which extended to the front of the auditorium (end of the building). This indicates that at one time those columns had been visible on the outside. When #4 was added, an external wall was built around the columns, which were simply hidden behind curtains on the interior. This made for some fun after hours hide-and-seek games.

I suppose it is possible that some of #3 was chopped off to make room for #4, but the layout seemed to me more in line with it having been the original size all along. For one, the port window was centered in the back wall, and I didn’t notice any signs of a changed configuration in there. You can see this in the third link of my previous post.

I can say most certainly that the two auditoriums of the original twin were not identical. The one that was split was much deeper and would have been absolutely huge. Perhaps that is why they called #2 (the smaller one) “The Intimate Theatre.” Thanks for that bit of information. I had never heard of those two names for the auditoriums.

Thanks for posting all of the photos. I saw my first movie at this cinema. I remember seeing ET, Three Men and a Baby, Dirty Dancing and everything else. I later got a job at the Macon Mall Quad, but this theater was closer to my house so I came here often to see free movies. I also remember using that pay phone upstairs to call mom to come pick me up.

Another think I remember was the steep hill to get out of the parking lot to turn on Riverside drive. I had to make a left to go home, and I was a new driver. I hated that hill.

I remember the Riverside Cinemas as being twin theaters when they opened, went to see several movies here when they were new. When the theaters left downtown, Westgate, Riverside, and Macon Mall became the theaters in Macon.

I started working at Riverside Cinemas around 1989 as an usher. There was a live tree in the lobby and everyone that worked there was like a family. I remember since we were located off the interstate some unknown celebrities stopped by after concerts. Riverside had the best Popcorn because it was made from a very expensive Cretors machine that had to be hooked up to a 10 gallon popcorn oil drum that took at least an hour to clean up if you spilt it. The Museum of Arts And Sciences lent “Fritz” the stuffed lion every June to be displayed by the live tree and someone would always put gum in poor “Fritz’s” eyes. Ushers had to give speeches after every Will Rogers charity fund commercial and the money cup always fell under the seats making it so sticky from stale soda. I sure miss the clang of projector platters feeding film to the projectors and ushers actually telling customers to “please get their feet down off the back of the chair”. “Fritz” the lion is long gone and pretty soon movie theaters like Riverside Cinemas will be too! Frank, Shirley, Louise, Jack, Lillian, Kelly, LeeAnn, Jason, Jason, Chad, Tommy, Lewis, Sherry, Heath, Kerry, Mrs. Smith, Yvonne, Veronica, Lindi, Tim, Rob, Bobby, Kate, Kate, Gayla, Tammy, Mandy, Mr. Nobles, April, Clay.Dave, Dave B…… Oh and “Fritz”…. 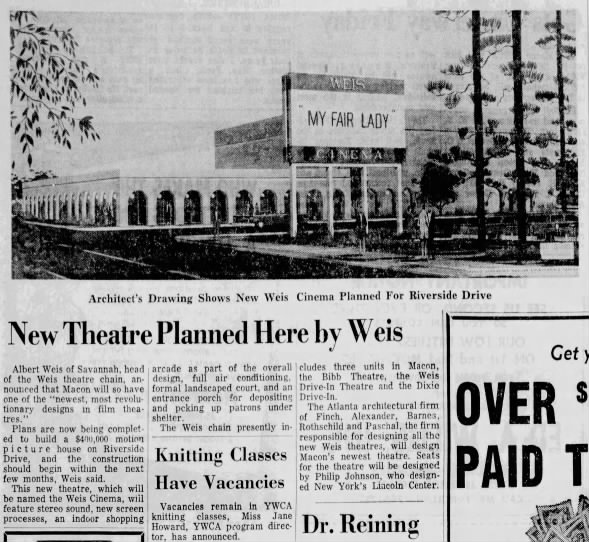 This is one of my favourite circa 1970s cinemas. This model, which was also part the GCC line up during this period, were the last of the multiplex breed to feature large screens and an element of style in the overall design. Glad that the furniture store has keep most of the cinema interior and just about all of the exterior relatively intact. This is a museum piece!