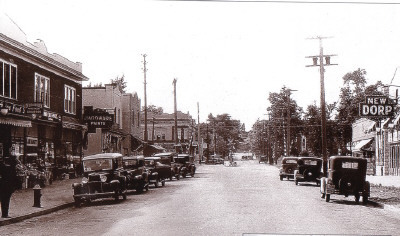 The Staten Theatre is located in the New Dorp district of Staten Island. It is listed in a 1930 Staten Island Street Guide and Map and is located closer to the Metro station across the lane from the Lane Theatre. Old-timers tell me it was nicknamed ‘The Itch’ becuase of it’s uncomfortable seats.

For many years it has been occupied by Coastal Kitchen & Bath Design Center.

Ken… I truly envy the job you’ve done capturing images of all these former theaters on film (or digital media, as the case may be). What an exhastive – and it would seem exhausting – visit you had in our fair city this past May and June! I’ve been on a few photographic safaris myself over the last year or so (though none as ambitious as yours) and you inspire me to find more time to pursue that interest. Good show!

Thanks Ed; Exhaustive, but not that exhausting LOL. I love wandering around cities seeking out cinema buildings. I took over 800 photos on this last visit and would love to have done a lot more but time was against me!

Glad to hear you are enjoying my input.

Ken, I know precisely what you mean. It’s an adventure that demands the sort of time and energy that would seem quite tiring to those looking in from the outside; but in fact it is quite an energizing experience and the sun always seems to set much too early!

I was in the plumbing supply place at 135 New Dorp Lane last week. The New Dorp must have been a small theater. The existing dropped ceiling is low and you can tell by looking at the back the back of the building from Jacques Avenue that it wsn’t much higher. The barest hint of a projection area can be seen at the back of the store where the ceiling drops even further. I have no idea if it still exists. The building was long ago split down the middle. Over the years many alterations have taken place. An applicance store is in the other half.

During the early 1980’s, I had a store in the Lane Theater building. One of the projectionists there told me that at one time, the New Dorp/Staten was an overflow theater for the Lane. They would show the same film and walk the reels across the street, as they ran out at the Lane. I’m not sure which years this would have been, but it’s my guess that he was talking about the 1930s and/or 1940s. In the 1980s, the former New Dorp was easier to discern, as the appliance store took up the whole space and (I believe) the fire exits were visible on the side of the building, which faced North towards the railroad tracks. The lot next door, where the animal hospital would later be built, was then vacant.

The right half of this building is now a Subway sandwich shop. The appilance store relocated to New Dorp Plaza South about a year ago.

Newspaper ads in the SI Advance started to appear on July 5th, 1947 for this theatre.