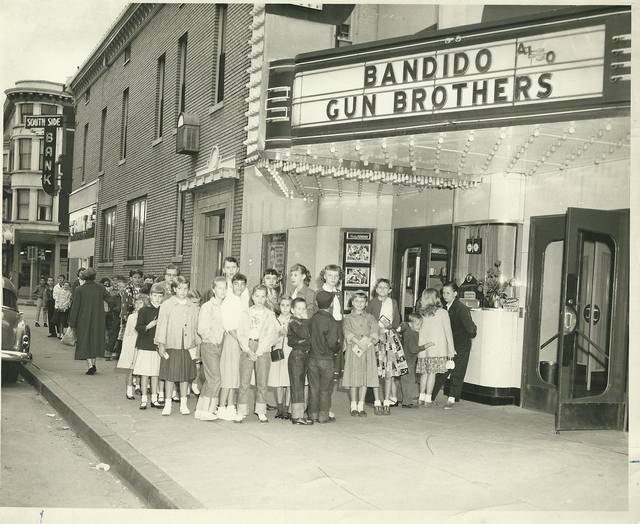 The State Theater (which had a crying room) opened in 1938. It closed as a movie house many years ago but has since been beautifully renovated and today functions as a reception hall and special events facility.

The State Theatre has been sold and completely renovated. It is now called the State Room. It is used for wedding receptions, parties and other events. They have done a wonderful job in the renovations. The old sign has been given a much-needed facelift to include a new coat of paint and all new working bulbs. The interior has also been re-done and includes pictures of the old theatre in it’s heyday. There are newspaper articles of when it originally opened for business and the old crying room is even being used again (complete with the theatre seats) as a changing room or whatever needed.
They really did a great job with this theatre and it is nice to drive by in the evening and see it all lit up and looking good.
Thanks for saving it!

Here is a HAARGIS profile on the State, including a 1970s photo.

History from the State Room site:

The State Theater was advertised as an attractive movie house, modern in every detail, including air-conditioning. It was a 500-seat theater with an Art Deco style The long,narrow design, sloping floor and Celotex material made the theater one of the most “sound perfect” buildings in the area.

The theater also had two innovations that had never been tried before in Quincy. The back row seats in the main section was fitted with acoustical devices for the hearing impaired. The other innovation was a â€œcrying roomâ€ in the second floor where mothers could take their small children and still view and hear the
picture. The entrance to the theater on South Eighth street had a wide lobby. The ticket office was in the center and to the right as one entered was the menâ€™s room and to the left was the powder room for women. The lobby was decorated in apple green and maroon
with silver stripes and a terazzo floor. In the auditorium, the seats were of the lastest style, self rising so that as soon as they were not in use they would fold up. The auditorium walls were a maroon finish to five feet from the floor, with a pleasing light color of Celotex material above that.

The last feature film at the State Theater was â€œLittle Man Tateâ€. The State Theater closed in February 1992 after Kerasotes Theaters had operated the theater for several decades.

The State Theatre at Quincy, Illinois, is listed as a 1938 project in the entry for architect Charles F. Behrensnmeyer in the 1956 edition of the AIA’s American Architects Directory.