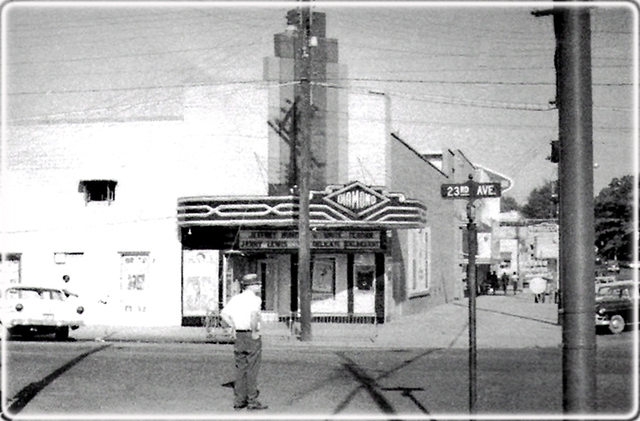 The New Diamond Theater was opened July 4, 1946 with Humphrey Bogart in “"Crime School”. It operated as an African-American theater. It was closed around 1967. In September 1967 it became a furniture store. A nice looking theater from the outside, could definitely have used some restoration when it was in use as a bar.

Unfortunately, by 2007 it had been demolished.

Listed in the Film Daily Yearbook;1941 and 1943 editions as being operated by Paramount Pictures Inc. through their subsidiary Wilby-Kincey. The 1950 edition of F.D.Y. give a street address as 23rd Avenue.

A Reproduco piano/organ unit may have been used in the Diamond for silent movie accompaniment.

Here is an article dated 10/14/07. The theater building has been demolished, and the marquee has been saved and put into storage:
http://tinyurl.com/2vg2tl

A view from 1957 of the Diamond Theater in Tuscaloosa.

The public library of Henderson County, North Carolina, has published a book titled “Buildings as History” which is about the works of Hendersonville architect Erle G. Stillwell. The Diamond Theatre in Tuscaloosa is listed as one of the many theaters he designed.

The original Diamond Theatre opened November 7, 1910 launching with live vaudeville shows and equipped for motion pictures. It replaced the Electric Theatre. In the Blue Front business district at 23d Avenue and Seventh St., Tuscaloosa built its first theater for the African American community. The New Diamond Theatre opened July 4, 1946 for African American audiences and serving what appears to be a twenty year lease and closing.

The 500-seat Diamond was an improvement over accommodations for the African American community which was restricted to the 125-seat balcony of the Ritz. The neighboring Diamond Drug Store soda fountain / lunch counter and Diamond Theatre provided the community with a place for a night out and provided some of the only rest room facilities in downtown for the African American community. In 1965, a group of African American picketers successfully ended what they called reverse segregation and the Diamond would become desegregated for its waning days of operation. In September of 1967, a furniture store used the then vacant theatre building to display overstock and discontinued sale merchandise. The furniture company also begins offering the Diamond Theatre seats for sale at $5 each at their sale as the theater’s days of exhibition are over. And 40 years later, the theater was a memory following its demolition.

Opened with Humphrey Bogart in “Crime School”, along with a performance by an all-negro band.