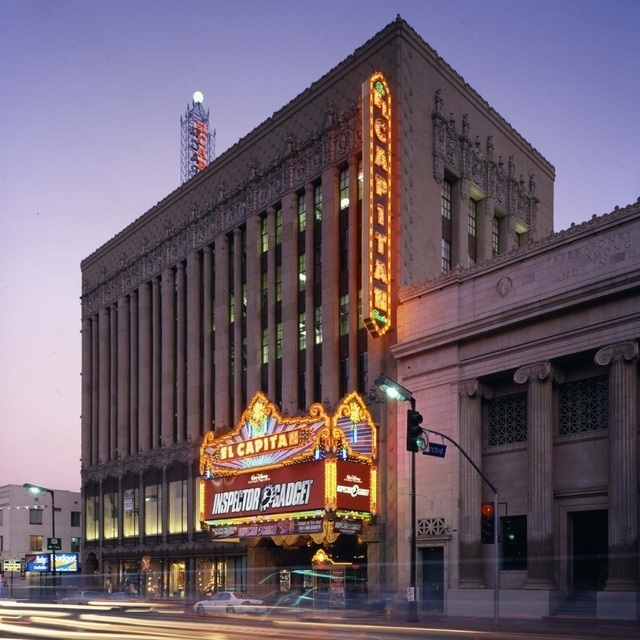 The El Capitan Theatre was built as a legitimate theatre by local Hollywood property tycoon Charles Edward Toberman, and is situated across Hollywood Boulevard from the famed Grauman’s Chinese Theatre. It opened on May 3, 1926 with the stage show “Charlotte’s Revue of 1926” staring Gertrude Lawrence, Beatrice Lilley and Jack Buchanan. The magnificent office building which fronts the theatre on Hollywood Boulevard was designed in a Spanish Baroque style by architects Octavius Morgan, J.A. Walls & Stiles O. Clements, and features Churriqueresque details and has characters from literature and drama carved into its upper storeys, including Shakespeare characters. This part of the building originally contained Barker Brothers furniture department store on the first and second floors with offices above, and was topped by a huge metal sky sign giving the name of the theatre.

The interior of the theatre is in an opulent East Indian Revival style, the work of architect G. Albert Lansburgh. Seating was provided for 1,435 in orchestra and balcony levels, with a stage box on each side of the 49 feet wide proscenium. The stage is 81 feet wide and 33 feet deep and there were seven dressing rooms and a full sized orchestra pit. The El Capitan Theatre operated very successfully as a live theatre from its opening until 1937, and attracted stars such as Will Rogers, Clark Gable, Fanny Brice, Buster Keaton, Jackie Cooper, Henry Fonda Rita Hayworth and Joan Fontaine to appear on its stage in dramatic plays and comedies.

In 1937 it was equipped to screen movies, and on May 9, 1941 it presented the world premiere of Orson Well’s “Citizen Kane”, with Welles personally taking over the running of the theatre for this presentation, due to it being blocked from being screened in other major theatres by William Randolph Hearst. The El Capitan Theatre was then renamed Hollywood Paramount Theatre, and came under the direction of Fanchon & Marco. In 1942, the theatre had a complete make-over, and a new interior was constructed over the original decorations, hiding them completely. Architects William & H.L. Periera were responsible for the design of this modernisation which consisted of corrugated sheeting that resembled a huge sea-shell. A large modern marquee was also installed over the entrance, above which part of the façade was covered in corrugated cladding, and a false ceiling was installed in the outer lobby and inner foyer areas. The ‘new’ Hollywood Paramount Theatre was opened with Cecil B. DeMille’s “Reap the Wild Wind”, and it remained a ‘premier’ house for many years. By 1950 it was operated by Cabart Theaters Corp. On April 11, 1968 it was operated by Loew’s as Loew’s Hollywood Theatre. General Cinema took over on July 12, 1972 and it was renamed Hollywood Cinema. They were followed by Century Cinema Circuit on December 19, 1973 who brought back the Paramount Theatre name. In 1976 it was taken over by SRO. Pacific Theatres took over in late-1983, by which time the Paramount Theatre was a general release house, and it was closed in 1989.

There were plans to twin the theatre with two 500-seat auditoriums in an Art Deco style, as it was thought that the original Lansburgh interior decorations had been 80% destroyed by the 1942 remodeling, but as work began on the conversion, workmen and the theatre owners were amazed at what lay beneath the false walls and ceilings. It was decided to drop the twin cinema scheme, and go for a ‘museum standard’ restoration scheme costing $6 million, financed by the Walt Disney Organisation and Pacific Theatres. Theatre artistic designer Joseph Musil was engaged to restore and replace the splendid architectural details of the theatre which had been hidden and damaged for almost 60 years.

Renamed El Capitan Theatre, it reopened on June 18, 1991 with a world premiere of Disney’s “The Rocketeer”, plus a stage show. The seating capacity has now been reduced to 998. In 1999, the magnificent Wurlitzer ‘Fox Special’ 4 manual 37 rank theatre organ, which was originally installed in the much missed Fox Theatre, San Francisco, was found a new home in the El Capitan Theatre, and is now played at program breaks regularly on weekends. The organ was dedicated at an opening ceremony on April 29, 2000 by house organist Dennis James accompanying a restored print of the 1924 silent version of “Peter Pan”. As the flagship theatre of the Disney Studios empire, it became part of the Pacific Theatres circuit of which Disney owns a large stake.

Every major animated release from Walt Disney Pictures Animation premieres here complete with a live stage show and more. The theatre was the first in the United States to announce an online movie ticketing and printing system.

The El Capitan Theatre is Designated a Historic-Cultural Monument.

This became the Loew’s in Hollywood on April 11th, 1968. Grand opening ad posted.

Renamed Hollywood Cinema as General Cinema took it over on July 12th, 1972 from Loew’s.

And renamed back to Paramount on December 19th, 1973 after Century Cinema Circuit took it over.

Martin Turnbull’s site with September 1954 photos of the premiere of “Sabrina”, at then the Paramount.

a blu-ray disc of Isadora starring Vanessa Redgrave has finally been released. interesting note- when it was known
as Loew’s Hollywood this was if I’m mistaken the only theater in the entire U.S. to play the original 2hr. 57min. cut. the new blu-ray is unfortunately the more well known truncated version.

This theatre has Dolby Vision and Dolby Atmos according to the El Capitan theatre website.

Please update, the theatre is owned by Disney and Pacific Theatres use to run the theatre

After the 2021 demise of Pacific Theatres / ArcLight Cinemas, who is currently operating the El Capitan?

Operated by Disney. Official site below.