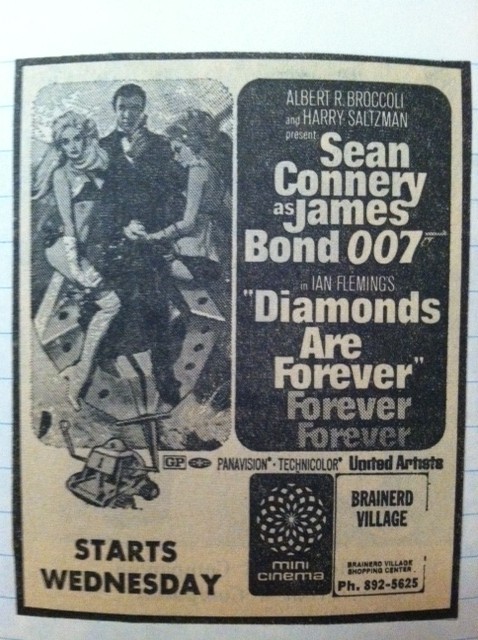 The Brainerd Minicinema was opened in March 1969 by the Modular Cinemas of America chain, based in Atlanta, GA.

This theatre was part of the MiniCinema chain of theatres franchised by Modular Cinemas. Modular Cinemas was out of Atlanta, and they pioneered the concept of the minicinema: very small theatres that could be fitted into already existing space in a shopping center. With small capacity auditoriums, automated projection, and a very small staff, minicinemas were popular in the early-1970s and elements of the format were incorporated into later multiplex theatres to refine that mode of theatre.

The Brainerd MiniCinema was in the Brainerd Village Shopping Center in Chattanooga and opened in March of 1969. It was the fifth minicinema opened by Modular, and it had a seating capacity of 400.

400 seats on both sides isn’t that bad.Any pictures anywhere of inside one of these MINI-CINEMAS? I bet Weis bought them out in Atlanta.Right Stan?

This link has an article in Boxoffice about the opening of this theatre. Really nothing about the theatre that Christofer did not relate, but it does give some information about the history of Modular Cinemas.

Yes Mike, Weis did buy out the remaining Minis in Atlanta during the summer of 1974. The first two, Peachtree Battle and Ansley Mall had already been sold, so Weis got Sandy Springs, Doraville, Candler Road, and the under construction site that became the Franklin Road, later renamed Cinema 75.