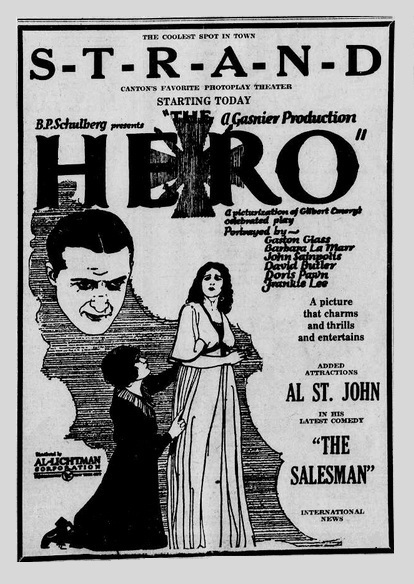 The Strand Theater was opened on July 12, 1917 with William S. Hart in “The Square Deal Man”. It had a Wurlitzer organ Opus 680 Style B installed on July 20, 1923. The Ohio Historical Society shows the architect of the Strand Theater as Elmer A. Tilden, son of Guy Tilden, a noted architect.

The Strand Theater was closed in August 1956.

â€œFather of the nickelodeons in Canton was A.H. Abrams, whose 5-cent theater at 225 E. Tuscarawas St. was at the Penny Arcade under the Johnson Dancing School,â€ wrote Heald.

But, others were equally popular to movie-goers in their day. For those who went in the â€™50s and â€™60s, even a partial list must include the Loewâ€™s, Valentine, Dueber, Ohio, Alhambra and Strand.

Loewâ€™s Theater showed â€œThe Caddy,â€ starring Jerry Lewis and Dean Martin. The Ohio Theater installed its wide screen shortly after, and both accompanied the huge screens with another movie innovation.

Rows of bespectacled film viewers stared in earnest at the screen. In Canton, 3-D movies had arrived.

That is the very same website I found the Canton theatres. I already posted those names on the Palace theatre listing. I wanted to add the nickelodeon but not sure if the name was 5-cent theatre. Do you have any idea of the real name?

Boxoffice of August 11, 1956, reported that the Strand Theatre in Canton would be closed before the end of that month, and would be demolished to make way for a parking lot for Canton National Bank. Joseph Calla, manager of the house for several decades, said that there were still about ten years to run on the theater’s 50-year lease, so the Strand must have been open by about 1916.

I grew up in Canton during the 40' and 50’s and loved to go up town where there was some great movie theaters. as a kid during the sumer you could get into the strand for 10 cents pluse a 10 cents for popcorn and a nickle for a candy bar what could be better? In 1955 I lived on Mckinly Ave SW and some times I would go to the Hamburger Inn, across from the train Station anf buy a bag full of there 15 cent hambers and take to the movies. The Strand showed mostly 2d run “b” movies a lot of westerns which I miss today. I joined the army in 1956 and the next time I made it back to Canton, the Strand was gone along with several other theaters. Canton was on it’s slide down hill and that is a shame it was a great place to grow up in the fifties.