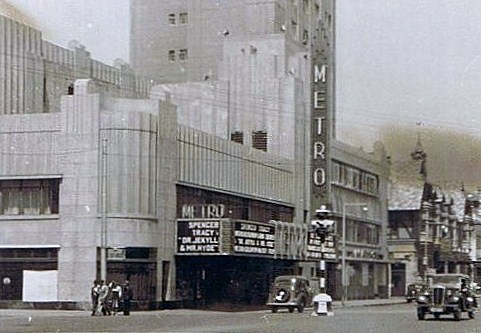 Located alongside the Playhouse Theatre and the Prince’s Theatre on Smith Street (today renamed Anton Lembede Street) and Albany Grove. This was the main Metro-Goldwyn-Mayer (Loew’s) theatre in Durban. The Metro Theatre was opened on August 13, 1937, and was equipped with a Wurlitzer 3Manual/13Rank organ.

The auditorium has been demolished, and a section of the Art Deco style front of the building retained as part of the Albany Hotel, together with an office tower which replaced the theatre.

I think this theatre was at one time also called the Loews.
More details on the Mighty WurliTzer Theater Pipe Organ. It was Opus 2209, WuliTzer’s last Opus is roughly 2238 so this is getting near the end of the long line of WurliTzer Organs. It was a 3 Manual/13Rank shipped on 27 March 1937.
I hope the following saga is fairly correct.
In 1963 it was taken out of the theatre by someone in Durban.
By 1980 it was shipped to Europe and was meant to installed in a public venue in Central Europe, but this never happened.
The instrument was sold again and was stored in Liechenstein and/or Switzerland. Probably because of bad crating, the pipe crates stored beneath other parts, shipment on the ocean and humidity it was believed the components were by then not in the best of shape. There seemed to be no silent movie effects.
In 2004, sadly Opus 2009 is broken up for parts and scattered to the four winds. However the Colsole was rescued and is in Worcester in the Midlands of England. It has traveled and had an interesting life. Ten months was spent restoring the Conlsole and with all original internal components having been retained i.e. Pnuematic piston action and setters etc. so the future is bright for this particular Console.
Work is well under way on connection to the relays, and all pipework, chests, regulators, percussions etc. are WurliTzer being made up of parts from the Embassy Chicago, New Victoria Edinburgh, George Wright’s Philharmonic Organ, Embassy Pittsburg, and many others, in fact from many different organs, but they all started out in North Tonawanda, New York many years ago.
So now you have a Console from South Africa, with parts from Europe and North America and who knows where else? Those WurliTzer do get around!
Anymore updates on any other parts of the organ?

These theaters, although operated by Loew’s International, were given the “Metro” name, rather than “Loew’s,” to more closely align them with the company’s longtime producing unit, Metro-Goldwyn(-Mayer), part of Loew’s, Inc. from 1924 to 1959. Metro Theatres/Cine Metros could, at one time, be found in South America, Africa, Asia, and Europe. Other theaters, like the Empire in London, were also operated by Loew’s.

The August 14, 1937, issue of Boxoffice reported that the Metro Theatre in Durban had been opened on Friday. As August 14 was a Saturday, the house would have opened on the 13th. The item also said that Metro houses had recently opened in Rio de Janeiro, Montevideo, and Lima, and that the Metro Theatre in Brisbane was slated to open on October 1. All these houses were part of an international expansion program by MGM’s theater division.

To add to Bob Jensen’s comment of many years ago. The organ in the Metro was bought by my father in 1963 and installed in the Billiard room of our house in Overdale Road in Durban. An extra room was built especially deep to house the pipes. There it remained until 1980 when my father became too ill to play it and it was sold to someone in Knysna in South Africa. I don’t know what happened to it after that. I have many memories of it played by my father as well as Buster Wheatley who played it when it was at the Metro.