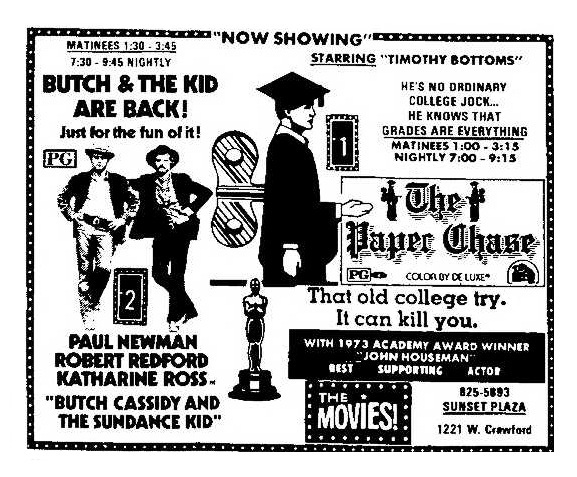 The Movies! 1 & 2 in Salina, KS, was the second cinema in the fledgling The Movies! franchised theatres chain, and was purpose built and opened June 30, 1971, as an anchor to the existing Salina Shopping Center.

The Movies! 1 & 2 exterior was designed in nostalgia nickelodeon form. This was the first theatre chain to hark back to early day movie presentation and do away with marquee letterboards, replaced instead by tracer light poster display cases.

In 1974, it was taken over by the Dickinson Theatres chain and renamed Sunset Cinemas. It was closed in 2000.

Salina’s The Movies 1 & 2 opened in summer of 1971. This was the first cinema franchised from the home office based in Oklahoma City. The very first The Movies 1 & 2, opened 1969 in Altus, OK, was corporate owned.

No, the Mid-States or Mid State twin, was located in the Mid-State Mall about 5 to 6 miles south of this location. The Mid-State was originally a Jerry Lewis franchise that was also taken over by the Dickinson circuit. The Mid-State is a totally different theatre than the one described here.

The franchisees of The Movies! at Salina were Don and Carol Porter, according to an item in Boxoffice of July 12, 1971. The company selling the franchises was called American Automated Theatres Inc., and was headed by J. Cooper Burks and Athel Boyter.

Boxoffice of August 19, 1974, said that The Movies twin in Salina had been bought by Dickinson Theatres and would be renamed the Sunset Cinemas. Dickinson’s Mid-State Cinemas 1 & 2 had opened the previous year.

Boxoffice of February 15, 1971, ran this article about AATI. There are a few drawings of their prototype theaters, and a couple of photos of the first The Movies! at Altus, Oklahoma.

As does Okie Medley in a comment above, This page at Cinematour (with photos by Adam Martin) gives the theater’s address as 1221 W. Crawford St., Salina KS 67401.

The Movie Theatre, Salina, new twin mini operation, held its invitational preopening Tuesday night, June 29, for local dignitaries and others. The theatre is operated by Donald Porter, who also owns the Porter Hotel, Beloit. It is the first franchise theatre in this area to be set up by American Automated Theatres of Oklahoma. The Movie has 240 seats in each auditorium.

The Sunset Plaza was a $1 million retail strip built theatre-less in 1959 and opening in 1960. In February of 1971, American Automated Theatres, Inc. announced its second location to be built at the Plaza. AATI was in the vein of Jerry Lewis Theatres and National General in putting classified ads that basically asked for a franchise fee in exchange for blueprints for a fully automated, one-button touch movie theater that would operate itself and watch the profits roll in.

Don E. and Carol Porter were the franchisees and launched the Movies! 1 & 2 June 30, 1971 with “Uncle Tom’s Cabin” and “One More Train to Rob.” And it didn’t take long for both parties to be in court as on April 5, 1972, the two were engaged in a legal suit over the franchise contract. It was the first of many court dates for American Automated Theatres' venture and not its last in Salina. In June of 1972, the Porters were out at the Sunset Plaza and AATI took on the venture, itself.

On July 23, 1974, with AATI on the ropes, Dickinson Theaters took on the venue renaming it the Sunset Cinemas. AATI would be in court for allegedly not paying for radio advertisements to KINA radio. On January 14, 2000, Dickinson repositioned the theatre as a discount sub-run $1 ticket and concession house as a test run for the circuit. It was a failure and the theatre closed soon thereafter and offered for lease.