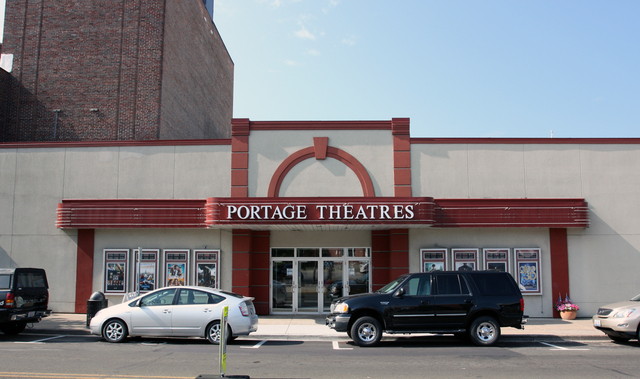 The Portage Theatre was opened on May 5, 1927 with Richard Dix in “Knockout Reilly” & Lloyd Hamilton in “Breezing Along”. It was listed with 777 seats and a 2 manual 9 ranks Barton organ was installed. The original auditorium was split into two theatres in December 1985. It became a triple screen theatre on May 1, 1987. An addition in the 1990’s added four more screens. The shell of the original theatre still intact, though all three theatres in this original portion of the building are completely modern.

If you enter the old lobby (which is not usually open anymore, I believe) and walk down the sloped hallway toward the new main lobby/concession area, you are actually walking down what would have been a side aisle toward the stage in the original theatre, though there is no trace of a stage here now.

The former fly area above the old stage, however, still exists and is easily visible from the exterior. The Barton organ has been removed from the building.

Portage Theatres today is a fine modern place to see a movie. Though a far cry from ornate single screen movie house it was in its youth, it is very well kept and modern. It remains as a focal point of downtown portage, as it has for generations. Residents and visitors alike still line up to buy tickets to the latest features at this theatre, which boasts one of the finest digital sound systems in Wisconsin.

The owners of this theatre also owned the 51/16 Drive-In on US 51 southeast of Portage. The drive-in was closed and sold in 1982 to raise revenue for the rennovation of this theatre from one screen to three screens.

I’ve found mentions of the Portage Theatre in Boxoffice Magazine as early as February 1, 1937, but it had been in operation for a decade by then. According to an architectural and historical survey of Portage, it was built by the Fischer-Paramount Theatre Company in 1927.

The trade journal Movie Age said in its issue of January 5, 1929, that Milwaukee theater man Leonard K. Brin had taken over eight Fischer-Paramount houses, including the Portage and Home Theatres in Portage.

I found a mention of a Brin Theatre in Portage in the March 16, 1929, issue of Movie Age, but I’ve also found mentions from the same period of a Brin’s Portage Theatre, and the Home Theatre and Portage Theatre operated by L.K. Brin, so it’s unclear whether or not there was a temporary name change at one or the other of the houses.

In any case, the Portage closed for a while early in the 1930s, until it was reopened by F.J. McWilliams.

The Portage was operated by McWilliams at least through the 1950s. One Boxoffice item mentioned that he had entered the exhibition business since 1907. He also operated the Home Theatre in Portage, as mentioned in various issues of Boxoffice from the late 1930s into the early 1950s. In 1952, McWilliams built the 15/61 Drive-In. Later the theaters were operated by Jack McWilliams, presumably F.J.’s son.

The historical survey I cited above said that the triplexing of the Portage Theatre took place in 1985.

While the newer portion of the building has the primary entrance, it is not the only one. The original lobby is still accessible, but only on weekends. For the past year it was open more often than that, and used as an entrance for the 3D features. Once a second 3D screen was added, that wasn’t necessary as they are on opposite ends of the theatre. Auditoriums one and six now have Dolby Digital 3D capabilities.

Other upgrades include new seating in auditorium two, and a larger, curved screen in one.

Though it says Chicago, the Portage in Wisconsin is in the parade footage beginning at the 59:17 mark.

The Portage Theatre opened on May 5, 1927 with Richard Dix in “Knockout Reilly” and Lloyd Hamilton in “Breezing Along” along with a newsreel. It was listed as part of the Fischer chain across Wisconsin. The original auditorium was converted into a triplex in December 1985.