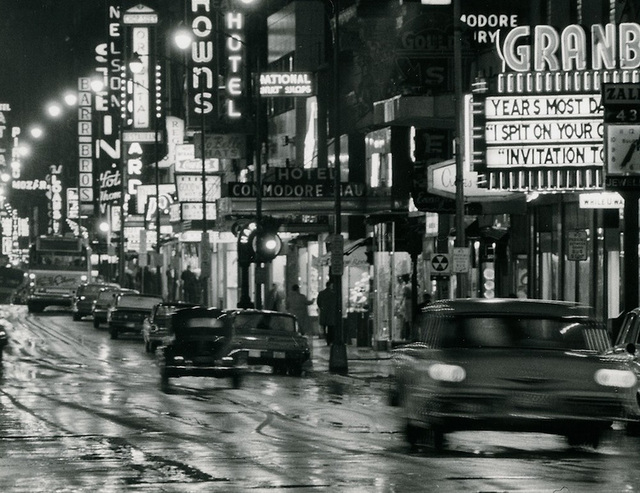 The Granby Theater originally opened March 18, 1916 as a vaudeville theater and later functioned as a movie theater before closing in 1985, and remaining empty for almost two decades.

It has been restored and renovated into a multi-entertainment center, nightclub, and concert hall called Premiere, with the theme of “where theater meets nightclub.”

I was able to tour this theatre yesterday. Currently it is undergoing extensive renovation scheduled to be completed in May. It will be a nightclub/comedy club/concert venue. The renovation is re-working the space to include a variety of seating options with tables and chairs, theater seats, etc with multiple levels. A dance floor will be created just in front of the stage. Though the theatre will not be used for films, one of the old projectors will be on display. Much of the original plaster was damaged and had to be removed, but ceiling medallions and pedaments are being re-created. Currently the old marquee is down, but is in the process of being restored and re-installed. This theatre has been closed since 1985. It was a movie house. In 1967 it had an extensive renovation and was used for the road show engagements of CAMELOT and FUNNY GIRL. The downtown area unfortunately was in decline and by the early seventies they has slipped to low grade action and horror films. Great to see that three theatres in downtown Norfolk ( the Loews, The Norva and now the Granby) have found new uses. The re-birth of that area is inspiring.

I’m currently restoring all the plaster work in this theater. The photos will be availible soon. This project started last summer, and is projected to open sometime early this summer. The new name for the theater is The Premiere. The facade and marquee will also be restored. The owners have a website “in progress” at www.premierenorfolk.com

The Premiere is still not open. Owner is apparently finding new expensive problems with this old theatre. My impression is he is doggedly persistent, and will stick with it until all the repair work is complete.

Hope this link works.
The theater reopened on 4/28/05 per the Virginian-Pilot.

Here is a June 2007 article about the possible re-opening of the Granby:
http://hamptonroads.com/node/282101

If you haven’t been to a wedding or corporate yet…you’re missing out!

I attended a wedding at Granby Theater last weekend and WOW! This place is breathtaking. I just told my boss to have our next holiday party booked here, Can’t wait!

I ran shows here in 1967-68 as an extra board operator for Local 550, the now long-gone IA operator’s local. Alonzo T. Hughes was the BA then and set all the projectionist calls from the booth office. It was mostly a B run house then with a heavy Navy attendance and had seen better days. Still, the equipment was well-maintained and was an easy booth to work.

Glad to know this theatre is restored and open! I’ll have to go visit if I’m ever in the Norfolk area.

From “The Encyclopedia of the American Theatre Pipe Organ” by David L. Junchen, pg. 631:

This entry means that the theatre’s name at the time of the book’s publication was/is the Granby, but it was originally called the Lee(?).

It also means that it was a two manual (number of keyboards) organ, but that the number of pipe ranks was not known to Mr. Junchen at the time of publication.

Finally, it means this was a “Seeburg-Smith” organ built by the company when it was associated with Seeburg and when the organs were built in the Seeburg factory in Chicago along with the Seeburg coin pianos and orchestrions. This would place the installation within the 1916-1921 timeframe, since Mr. Smith formed his own company circa late 1921 / early 1922 in Chicago, then moved to Geneva, Illinois a few years later (Geneva-Smith), and finally, moved to Alameda, California a year or two after that (Leathurby-Smith).

Since I’m in the midst of researching Smith organs in the Music Trade Review magazine archives, I though it would be appropriate to post this mention of the Granby organ here, which gives just a little more info (an approximate year of installation):

The J. P. Seeburg Piano Co., Chicago, made a representative showing of automatics and electric pianos in the exhibit on the mezzanine of the Drake. [Note: this is referring to the big annual musical instrument trade show / convention held in Chicago in 1921] Two models of the new Lilliputian automatic, which is probably the smallest of its kind in the world, made their debut at the convention. There was also shown the console of a Smith-Seeburg organ which is to be installed in the Granby Theatre, Norfolk, Va. J. P. Seeburg, Marshall Seeburg, Lee S. Jones, H. O. Ellis, O. A. Ball, R. H. McCabe and O. A. Gressing attended."

Numerous web sites say that Jake Wells built the Granby Theatre in 1901. An ad for Jake Wells Enterprises in the August 2, 1912, issue of Variety gave the Granby Theatre Building, Norfolk, as the location of the company’s headquarters, though they also maintained a booking office in New York City. The Granby Theatre was one of three theaters in Norfolk that was listed in the 1909-1910 Cahn guide.

The opening of the Granby Theatre as a movie house was noted in the March 18, 1916, issue of The Moving Picture World:

“Norfolk, Va.—The Granby theater, opened recently in Norfolk by George Karanicholas, is one of the handsomest theaters in the State. It is reported that at the initial showing of pictures there were 6,121 paid admissions and so great was the crowd that it was necessary to secure the aid of the police to keep things in order. The theater has a seating capacity of 1,500.

“The foyer is richly carpeted in red, bordered by shadow box portraits of moving picture stars, and potted plants. The interior color scheme is carried out in old rose and subdued smoke. The chairs are dark green. The screen is 18 feet by 22 feet, is in the center of an attractive proscenium made and painted by a New York firm of scenic artists, and is said to be the largest in the section.

“An indirect system of lighting is used and the ventilating system Is one of the best. A seven-piece orchestra is employed and the music is excellent. Every convenience for patrons is furnished. There is a very attractively furnished retiring room for the ladies and a handsome fountain has been installed in the lobby. A more complete description of this theater will appear in a succeeding issue of the Moving Picture World.”

I finally discovered what happened to the original Granby Theatre that Jake Wells built in 1900. On January 1, 1918, a fire that started in the theater destroyed almost two blocks of downtown Norfolk, including the Monticello Hotel. A New York Times story about the disaster can be read at GenDisasters.

The theater had apparently been closed for some time prior to the fire. The new Granby Theatre was built in 1916, according to this paragraph from a brochure for a self-guided tour of Norfolk:

“(B. 1916) The Granby Theater was designed by local architectural firm Neff & Thompson to replace a 1901 vaudeville house of the same name located behind today’s Federal Building. The Granby Theater was originally affiliated with Paramount Films. Patronage declined in the mid-20th century, and the theater closed in 1987, however it was reopened in 2005.”

The partnership of architects Thomas P. Thompson and Clarence A. Neff was established around 1902 and was dissolved in 1933.