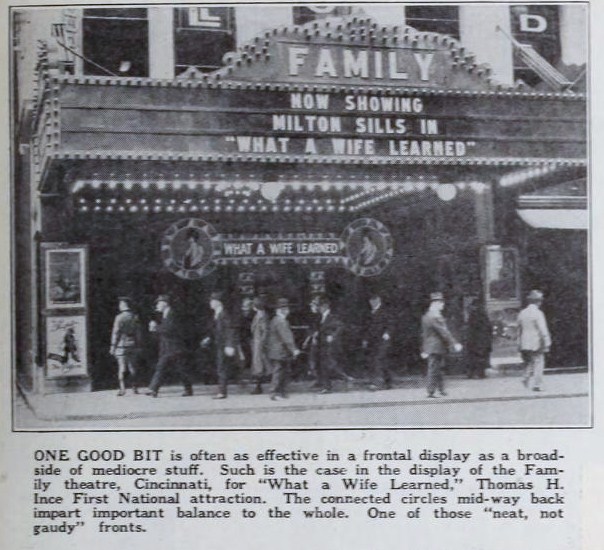 The Family Theater, a vaudeville and film venue, opened on February 20, 1911. The Family Theater was the second of Ike Libson’s chain of theaters starting with his Bijou Theater on Fountain Square in 1908. The combined vaudeville/films format changed to just movies in the first year with the house seating at 1,100. As an entertainment site the 526 Vine Street location started as a rough saloon named Kold & Middleton’s, then Heck & Avery’s Dime Museum, followed by the Majestic Concert Hall, a stage venue, all of these during the 1880’s.

By 1910, the Libson, Heidingsfeld, Harris chains from Pittsburgh combined and converted the Family Theater to a flicker show and vaudeville, going on to greater glories in December 1927 with the opening of the newly built Albee Theater on Fifth Street.

By 1930, Libson sold off his chain to RKO and the Family Theater became the RKO Family Theater at this time. On November 25, 1948 it was renamed Western Theater. On January 5, 1953, the Western Theater became the New Lyric Theater to take advantage of the name of its former neighbor at 508 Vine Street, the Lyric Theater, (built in 1905 as a legit playhouse and converted to films only in 1921, and razed in 1953).

The New Lyric Theater was closed on November 25, 1953. The theater was demolished in October 1957 and currently on the site is an Arby’s restaurant.

Various 1910 issues of The American Contractor had news about this theater, which was an existing music hall that was being remodeled and expanded. Some of the items mention J. B. Harris of Pittsburgh and Daniel Butler of Cincinnati being involved in the Family Theater & Amusement Company. Architects for the $25,000 project were Kennedy & Adkins.

Current site of former Family Theater is a mexican restaurant with the alley to the left. This alley would have been the same one which seperated the Family Th. from the hotel next door.

The Gazley Building had a long history in downtown Cincinnati. The Florentine Hotel once was housed there opening January 1, 1878 and adjoining the Woods Theatre. Its early roots of housing entertainment can also be traced to the Heck & Avery Dime Museum serving as early roots of entertainment way back in 1886. Within ten years, the venue became the Heck & Avery Dime Museum and Fmaily Theatre.

On June 18, 1910, plans to install the Family Theater were unveiled giving the facility a new steel interior. RKO dropped the theatre in 1948. It became a grind house called the Western Theatre on November 25, 1948 playing continuous double and triple features of westerns. It launched with “Hands Across the Border” and “Newshound.”