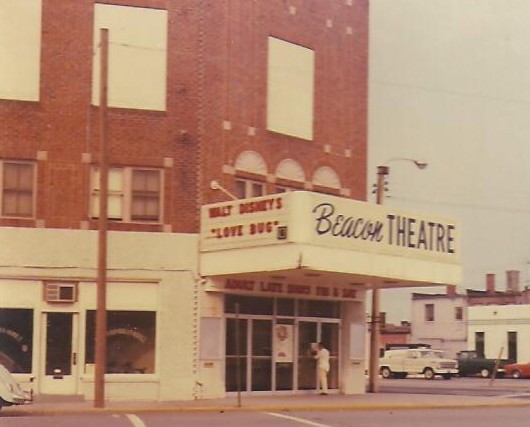 Originally opened as the Broadway Theatre November 28, 1928. It was renamed Beacon Theatre in 1930. It remained in operation until 1981. Six years later, a campaign was launched to restore and reopen the Beacon Theatre. The theatre reopened in 2005 used for special events. It reopened as a live performance venue in January 2014.

Does anybody have any information about the organ that was originally in the Beacon? In the Petersburg newspaper’s coverage of the grand opening there is mention of the $20,000 organ but nothing more about it.

Here are some details about the renovation:
http://tinyurl.com/5sby23

My grandmother worked at The Beacon for a while I believe during the 50’s and into the 60’s. My mother also worked there briefly as a concessionist during the early 60’s or late 50’s. I remember my grandmother telling me about how some of the customers complained of rats in the theater while watching the movie. She also managed the Bluebird and Walnut Mall theaters as well. There was another theater called The Century in Petersburg (which was beautiful in its day) that she worked at as well before they demolished it way back in the late 60’s I think.

The Beacon closed for the first time on June 30, 1962. It reopened under new ownership several months later. Hopewell didn’t support it, however, and it closed and reopened several times until it closed permanently. Before it closed for the last time, its name had been changed to the Town.

Beacon Theatre is NOW OPEN! see the website at http://thebeacontheatreva.com/

Leon Russell in person was at the Beacon on January 12, 2014. Check the new website for future shows. I have added new pictures to the photo gallery of the restored auditorium, courtesy of the Beacon Theater

The main image should be changed as well as the official web site address. see http://thebeacontheatreva.com/

The Beacon’s Facebook “About” page (here) has a different history than our description. It says the theater was built by the Knights of Pythias in 1928.

There was a Broadway Theatre operating in Hopewell at least as early as 1916, when it was mentioned in the September 30 issue of The Moving Picture World, but it was apparently a different house than the Broadway that opened in 1928.

The NRHP registration form for the building says that the Broadway Theatre in the Pythian building opened on November 28, 1928. The house became the Beacon Theatre under new ownership after the original operators defaulted on their loans in 1932. The form also attributes the design of the building to both Fred Bishop and local architect Osbert L. Edwards.